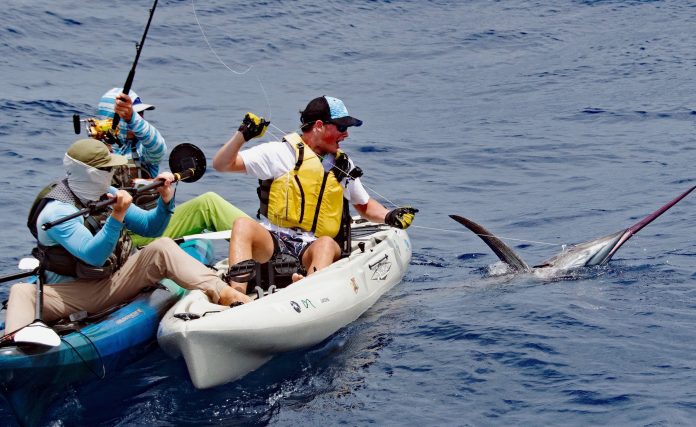 Water sports are as enjoyable as they are competitive. They can even be on the border of extreme. While fishing can be very laid back and relaxed, it can be very intensive too. 18-year-old Colby Blackwell can attest to that with his multiple world record catches.

Finishing up high school, Blackwell is heading to Auburn University this fall. He plans to keep playing basketball and is looking forward to exploring subjects like business, marketing, and marine biology.

This passionate kayak angler has some serious fishing experience under his belt. Blackwell caught a Cobia when he was only 10 and followed this up by hooking Sailfish, Swordfish, Marlin, Tarpon, Roosterfish, and the prized Yellowfin tuna. It is no surprise that this skilled young sportsman is drawn to the thrill of kayak fishing. He describes himself as a problem solver and loves to fish for fun more than recognition. Yet, he still caught the world’s attention when he became the first person to catch a Swordfish, Marlin, and Sailfish out of a kayak. Don’t believe it? Check out his YouTube video on this here.

In 2019, this teenager caught two world record-sized fish off the coast of Panama at the Los Buzos Resort. One was a 52” Cubera snapper and the other was a 50” Broomtail grouper. These massive fish were caught, you guessed it, from a kayak. Blackwell was just getting started and developing a taste for sports fishing when he set out on an excursion near Costa Rica.

The blue marlin is a powerful predatory fish. They are also among the most respected trophies in the fishing world. Usually solitary, large numbers of blue marlin can be found 75-100 miles from Costa Rica. Attracted to this area by buoys known as fish aggregating devices, anglers can catch dozens of these prized fish in a day.

Knowing this would be his best opportunity to catch a blue marlin, Blackwell boarded a local charter board called Thumper Blue Water Expeditions and set out with long-time guides to Fishhook Marina. Once there, the kayaks went into the open ocean, and Blackwell hooked something just an hour later. That is a very large something that he battled with for two hours in a scene straight out of a fisherman’s dreams. Colby Blackwell defeated a 10-foot, 250-pound blue marlin and prevailed.

As he fishes for the experience, Colby and his team had a bittersweet moment as they cut the line and watched the majestic fish swim away. Yet Colby can add this catch to his already-impressive list, not to mention he has a great tale to tell. Here’s to hoping he can fit fishing in when he heads to college so we can continue to hear incredible stories about this young man!

Firas Kazma: More than an entrepreneur and one of the biggest food bloggers in...