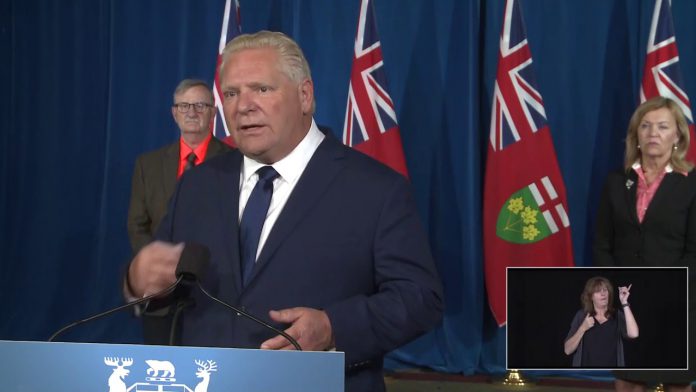 No Curfew for Ontario Likely – Sources in Ontario Government

Thunder Bay – NEWS – The Ontario Cabinet is working on the details of a plan to stem the surging COVID-19 numbers in Ontario.

The big move on a curfew has been disclaimed by Premier Ford earlier today.

It is likely, in seeking to balance health needs and the economy, the Cabinet will put the following restrictions in place:

There are calls for Ontario to be placed in a state of emergency.

What has been slow to rollout is the plan first presented in December when the lockdown was announced for support for small business.

The closure of small business has put some serious strains on the sector of the economy likely least capable of surviving. In Thunder Bay some restaurants have already announced closures.

The small business sector is starting to question the Ontario Government’s logic in closing them down and allowing big box stores to remain open.

There are reports of businesses simply starting to defy the closure orders. There was a protest in Thunder Bay on Memorial Avenue today with small business owners demanding to be open.

There is no word yet on any new measures to protect Long-Term Care Homes. There have been a majority of the 5,012 deaths from COVID-19 in Ontario happen at senior’s homes.

Homes like the Southbridge Roseview LTC facility in Thunder Bay have been where 20 of the 22 deaths in the Thunder Bay District happened.

Provincially, the Ontario Health Coalition says, “Clearly the measures that have been taken are not adequate. Virtually every day we hear from staff and families about inadequate PPE, improper cohorting and infection control practices, lack of accountability for the home operators who are not ensuring adequate safety measures, and crisis-level staffing shortages. The death toll will surpass 3,000 residents, likely today. Long-term care outbreaks have spread now across the entire breadth of southern Ontario and into northern Ontario. London, Guelph, Waterloo and Durham have joined Toronto, Halton, Hamilton, Niagara, Peel, Windsor, York as hotspots and Northern Public Health Units like Thunder Bay has experience tragic outbreaks despite being untouched during the first wave.”

Premier Ford Questioned on the Delay in Action

On Friday, Premier Ford told Ontario that “On Monday, the modelling numbers are going to have people falling out of their chairs.”

Cabinet and caucus held meetings over the weekend, and on Monday, meeting long into the night, with sources telling NetNewsLedger that there was a lot of talk, and not as much action as one would like to see.

The modelling and the plan of action now scheduled for Tuesday, come days after the Premier first told people there was a problem.

“Tough new public health measures are now long overdue — hospitals are already in crisis, and today we have surpassed 5,000 deaths, including 3,000 precious lives lost in long-term care homes, with thousands more getting sick every day. Tougher measures are not only overdue, they must be backed by a major investment in immediate supports like paid sick days for every Ontarian, safe isolation facilities, and direct financial help for small business owners and individuals.”

The Ford Government came out firing at the federal government over Pearson International Airport.

However several times over the past week, the Health Unit has unveiled information on what is being deemed “Low-Risk Exposure” to COVID-19 on flights into Thunder Bay.

It is not known yet if Ontario will put in place some form of their federal plan for travellers inside the province.