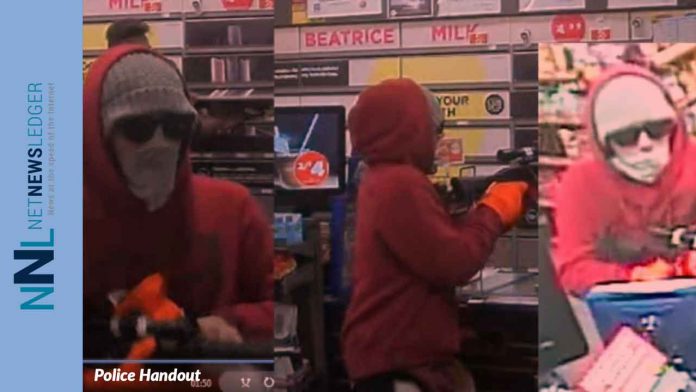 Officers with the Uniform Patrol Branch were dispatched to the Circle K convenience store at 640 Waterloo Street South just before 8:30 pm on Sunday, December 1, 2019, following reports of a robbery that had just occurred.

Police were told that a male armed with a long gun entered the store with his face covered. The accused reportedly pointed the firearm at the store clerk and demanded money.

The accused, according to witnesses, then fled the store on foot, heading west through the Alma Adair Park across the street from the store.

Through their ongoing investigation, police obtained video surveillance footage showing the accused during the robbery. Images from that footage are now being made available to the public in hopes the suspect can be positively identified.

Investigators believe this incident is connected to another armed robbery that took place on Saturday.

Thanks to the combined efforts of members of dispatch, the Emergency Task Unit, K9 Unit, Community Response Team, and first-responding Uniform Patrol Branch officers, police located a discarded rifle believed to have been used in the robbery.

If you have any information that could assist police in locating the suspect involved in this armed robbery please call 684-1200, or provide tips through Crime Stoppers at 1-800-222-8477, online at www.p3tips.com.