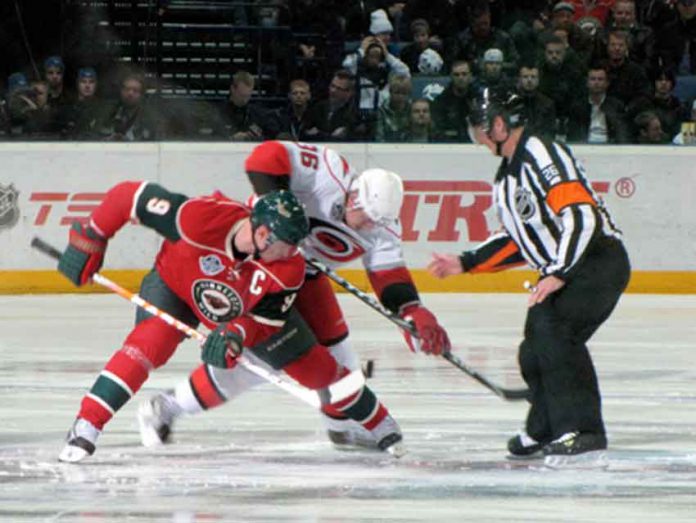 He shoots! He scores!

On Sunday, on Rogers Hometown Hockey from Enoch Cree Nation (just outside of Edmonton), Sportsnet and APTN partnered to broadcast the NHL game between the Montreal Canadians and Carolina Hurricanes in Nehiyawewin (Plains Cree).

Hosted by play-by-play announcer Clarence Iron, alongside Cree teacher Jason Chamakese, former NHL player John Chabot, and musician Earl Wood, the show was produced in APTN’s Winnipeg studios and claimed to be the “first ever hockey broadcast in the Cree language.”

Not quite: Romeo Saganash (now an NDP MP) and Sydney Ottereyes broadcast a Montreal Canadians-Quebec Nordiques game in Cree on radio in the late 1980s.

Still, it was a remarkable moment. CBC host Ron MacLean even wore a ribbon shirt.

On social media, Indigenous peoples were excited. APTN producer Bruce Spence posted photos of his 101-year old grandmother enjoying the game. Cree speakers such as former Assembly of First Nations national chief Matthew Coon Come posted pronunciations to practise. Many openly cheered on Micheal Ferland, a Cree from Swan River who plays for the Hurricanes (he got one assist).

By the end of the first period, “Cree” was even trending on Twitter.

After the final whistle sounded (a 2-1 victory for Carolina), the real winners were Indigenous language advocates and speakers, who have fought a never-ending battle to keep Cree alive.

Due to residential schools and the laws that forbid Indigenous language use — not to mention the shame many of us carry in relation to the language — most of the 70 surviving Aboriginal languages in Canada are under serious threat of extinction.

With the number of fluent speakers on the decline, many are on the verge of disappearing in our lifetime. Several are estimated to have fewer than 100 speakers. (Those with the greatest chance of survival are Inuktitut, Ojibwa and Cree. In 2010, CBC North broadcasters Charlie Panigoniak and Annie Ford called an NHL game between the Ottawa Senators and Montreal Canadiens in Inuktitut.)

Continuing the legacies of the past, Canada appears to be letting this happen. Support for Indigenous languages has always been at the whim of federal and provincial governments.

For instance, Indigenous languages receive a fractional amount of support and lack “official” status and funding on par with English and French. Only one territory, Nunavut, recognizes Inuktitut.

The new federal Indigenous Languages Act and its 2019 budgetary allocations won’t make a dent in this trend.

The fullest cultural, political, and social livelihoods of Indigenous peoples are in our ancestral languages. Language shapes the way Indigenous communities think about, act, and interact with the world. Language is integral to our survival as a distinct people and embodies deep historical knowledge and ancestral ties to the geographies in which we live.

Simply put, Indigenous languages must be used if they are going to survive into the next century. They must be a part of all aspects of our lives, from the way we parent to the way we work and play.

This is why Cree spoken during an NHL game is so important. Sport has always been one of the venues in which Indigenous peoples have maintained our nations in the face of residential schools, the Indian Act, and violence.

Indigenous languages must be used if they are going to survive into the next century. They must be a part of all aspects of our lives, from the way we parent to the way we work and play.

For millennia, Indigenous communities played sports to articulate our relationships with the world. Many of our games are tests pitting ourselves against water and land (such as snowshoeing, kayaking and canoeing). We also like to compete against other Indigenous nations, with rivalries going back generations.

For an example, look no further then Canada’s national sport, lacrosse — invented by Indigenous peoples in the east.

During residential school, sport was one of the only times students could be free of the control of the priests and nuns. Some former students went on to become world-class athletes. (Tom Longboat, an Onondaga runner who won the Boston Marathon in 1907 also represented Canada in the 1908 Paris Olympics.)

Sport was the venue for our resistance and the space of our continuance.

Sport is a sort of language. It’s a statement by Indigenous peoples that we are healthy, strong, and are not going to disappear. The Truth and Reconciliation Commission of Canada highlighted this in call to action No. 87, calling upon all levels of government “to provide public education that tells the national story of Aboriginal athletes in history.”

Now, we are using sport to help save our languages, showing young Indigenous peoples and Canadians our languages are innovative, entertaining, and vibrant as ever.

It’s only one game of soskwatahikewin (hockey), but it’s a step.

APTN has announced it intends to investigate the possibility of broadcasting more games in Indigenous languages.

If Sunday was any indication, there is a market and an interest.

There’s also a future. We just have to go into the corners, work hard, and commit.

So, let’s drop the atihkwasiniy. We’ve got work to do.

Originally appeared in the Winnipeg Free Press on March 26, 2019. Republished with the permission of the author

Under The Northern Sky – ‘The Night Sun’

Remembering When – Under the Northern Sky