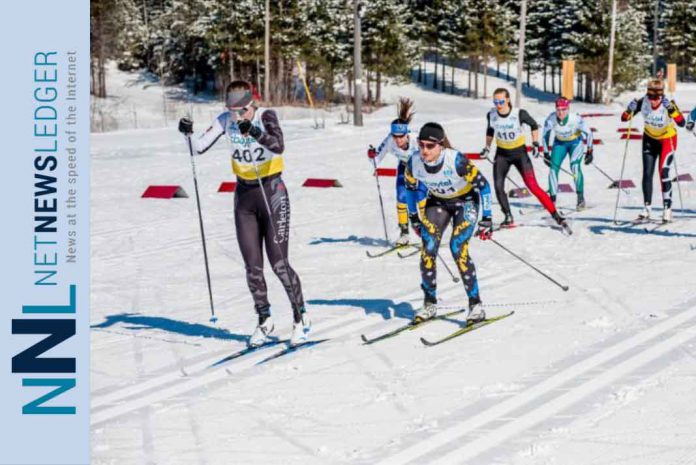 THUNDER BAY – SPORTS – Lakehead’s Nordic ski team is currently competing at the OUA championships in North Bay, and, in the Thunderwolves nordic tradition, the Lakehead squad has seen several of its athletes among top finishers.

The OUA championships opened with Saturday’s 12 km classic mass start events. On the men’s side, Lakehead had seven combined skiers finish within the top ten of the men’s and women’s races, including Noah Thompson and Malcolm Thompson within the men’s top four, and Alannah Maclean and Shaylynn Loewen within the women’s top four.
Sunday’s event was the 7.5 km free, an individual start skate race. Lakehead placed eight combined skiers within the top ten of the men’s and women’s races, including Noah Thompson within the men’s top four, and Alannah Maclean and Shaylynn Loewen again within the women’s top four.
“Conditions were challenging on the first two days with fresh snow on Saturday and cold temperatures on Sunday,” Thunderwolves coach Adam Kates said.
Top four finishes from each race count toward team title scoring. Monday’s relay race will also count toward team title scoring.
“This championship has been what we expected: a tight battle with Carleton,” Kates said.
Lakehead currently leads Carleton in top-four finishes with seven across the four events to the Ravens’ six. In the men’s team finishes total it is an even 3-3, while in the women’s the Thunderwolves hold a narrow 4-3 lead, however, though Carleton hasn’t controlled the podium in quantity, the Ravens have managed a first-place finish in every event.
“Our men’s team depth has been clear, and we are happy to hold a slim lead going into the final day of competition,” Kates said. “Our boys all skied strong and gutted out some really good efforts. I’m very proud of the team effort and ability to perform under pressure. It will be a fun finish tomorrow with the relay deciding the team banner.”
“Our women’s team has had some very strong results, winning 3 of 6 medals over the first two days of competition,” Kates said. “We’ve seen very strong skiing from our entire team, from veterans and rookies alike, but we currently sit second to a very deep Carleton women’s squad in the team standings. Our top three women are gunning for gold in tomorrow’s team relay and look to close out this year’s championship with a win.”
Saturday and Sunday’s events also factored into individual results, and eight Thunderwolves skiers were named OUA all-stars:
Women
Alannah Maclean
Shaylynn Loewen
Erika Mihell
Men
Noah Thompson
Malcolm Thompson
Gavin Shields
Geoff Way-Nee
Conor McGovern
“I’m very proud of both teams and how they compete,” Kates said.
Monday presents the final day of the OUA championships competition.