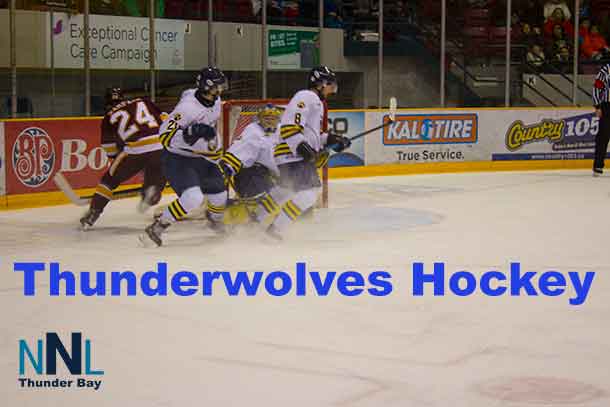 THUNDER BAY – SPORTS – The Lakehead Thunderwolves put on a dominating performance for the 2,026 fans at the Fort William Gardens on Saturday night, outshooting Nipissing 73-27 en route to a 6-1 victory over the Lakers.

After a scoreless first period in which the Wolves fired 28 shots on Lakers’ goalie Taylor Joseph, Daniel McKitrick scored two goals just 11 seconds apart early in the second to stake Lakehead to a 2-0 lead.

Jordan King added another when he fired the puck past Joseph after it caromed off the back glass and landed in the slot.

Nipissing’s Colby Tower beat Lakehead goalie Devin Green at the 15:40 mark, but Cooper Leitch scored with only 12 seconds left in the period to give the Wolves a 4-1 lead after 40 minutes.

Brennen Dubchak put Lakehead up 5-1 with a power-play goal at 11:08 of the third, and Josh Laframboise rounded out the scoring with a hard wrister that sailed past Joseph’s glove with less than two minutes remaining in the game.

On the night, Lakehead was 1-for-8 on the power play, while Nipissing went 0-for-4.

The Wolves will face a tougher test when they head south to take on the Bemidji State Beavers in their first road test of the season next Saturday, with the opening face-off set for 6:07 pm CDT.