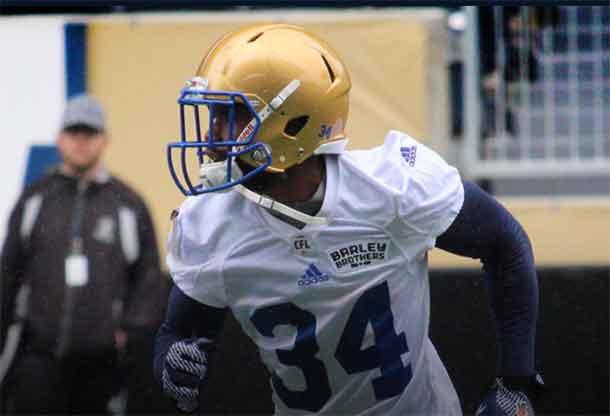 For as long as the lens has followed sports, broadcasters have denied fans the language, noise and strategy of the game – until now

WINNIPEG – SPORTS – It’s the next frontier of TV sports broadcasting. Naturally, the Canadian Football League is leading the way.

What? The CFL schooling all the big boys on cutting-edge audio technology?

Yup. The final frontier of live broadcasting is going inside the audio of the game. Since TSN and the league gave it the go-ahead, we’ve had a miked Calgary Stampeders head coach Dave Dickenson taunting Saskatchewan Roughriders kicker Brett Lauther before a field-goal try, saying, “You’re going to miss!” (Lauther made it.) We’ve also had more than a couple of inadvertent F-bombs.

And there’s been the steady stream of play calls going into the helmet of the quarterbacks, then relayed to the players in the huddle. Only the cognoscenti can unscramble the jargon of “FB West Right Slot 372 Y Stick,” but that’s okay, too. The secretive shroud has been lifted.

For as long as the lens of the camera has followed sports, broadcasters have denied fans the language, noise, and strategy of the game. We saw lip flap. We tried to read lips. We guessed at what they were saying.

But the smack talk, the beaking off, the bench conferences were all conducted in a haze. When the networks were really pressed, they canned some audio, censored the “s–t” out of it and put it out a few days later in a safe format.

Until the CFL went there full-time and live this year, no one had gambled on what we would hear from the stars and their coaches in actual time. But this year, the league and their TSN partners have let it rip with unlimited audio in live time. As the CFL website explains the policy: “Live Mic” places Q5X QT-5100 PlayerMics on both teams’ quarterbacks, backup quarterbacks, and head coaches.”

Games begin with an audience warning that some of what you might hear could offend you. But other than that – and a very alert technician with a bleep button – CFL games are as close to a full experience as we’ve ever seen on conventional TV.

Why have network demurred so long?

Obviously, they were – and are – cautious about the sexual, racial and ethnic talk that can crop up in heat of battle. (So far, TSN has managed to avoid anything truly offensive on these topics.)

Then there’s the natural aversion among coaches to reveal anything that might hint at injury problems or strategic decisions. To say nothing of providing grist to the coaches’ critics who can seize upon a demented decision or a personnel flareup on the sidelines to make their lives more miserable.

But the success of the HBO Hard Knocks series shows there’s an appetite among fans to get the nitty-gritty of what happens inside dressing rooms or on the sidelines, or in the general manager’s office. Watch a GM have to cut a prospect or see a player deal with crippling injuries. It’s both a heartbreaking and an endearing look at players who otherwise might be seen through the prism of an anthem protest or an anodyne sideline chat.

For all the shade cast on the CFL, you have to give credit to the league and its exclusive broadcaster for having the nerve to defy the industry’s reluctance to go full-audio. In doing so, they’ve stayed ahead of their cousins in the National Football League on such technological and viewing innovations. The use of video replay to reverse (or call) penalties is the sort of insight that fans want – even if it makes coaches, GMs, and owners blanch.

Perhaps the best way to get the NFL, the National Hockey League, Major League Soccer and the National Basketball Association to follow the CFL’s lead is to introduce a profit motive. As I’ve suggested for many years, fans would probably be amenable to paying for unlimited audio. Pay a special fee on top of your NHL or NFL subscription package and get full live audio from games.

The effect might be like what happened when Hollywood converted from silent movies to talkies. Instead of scandal, they’d have a new generation of viewers interested in their product. You can just see the promotion: “Fans, you’ve have seen your favourite sports stars for years. Now hear them live for the first time.”

It’s just crazy enough to work. But that’s the CFL. Sometimes, it’s crazy like a fox.

Columnist Bruce Dowbiggin career includes successful stints in television, radio, and print. A two-time winner of the Gemini Award as Canada’s top television sports broadcaster, he is also the publisher of Not The Public Broadcaster.