by Survival International
LONDON – Extraordinary new footage of the last surviving member of an uncontacted tribe has been released by FUNAI, the governmental protection agency for tribal peoples in Brazil.

The Last of his Tribe from Survival International on Vimeo.

The man, known as the Last of his Tribe, has made it clear he wishes to avoid contact with mainstream society. His avoidance of interaction means that no one knows his story, but it is likely his tribe were annihilated by gunmen hired by colonists and ranchers who invaded the land from the 1970s onwards.

From his abandoned campsites, we know he plants corn, manioc, papaya & bananas.  He hunts too, and digs holes about 2 metres deep with sharp staves in the bottom to catch animals to eat. He makes houses of straw and thatch, and digs a hole inside, presumably to protect himself if attacked. 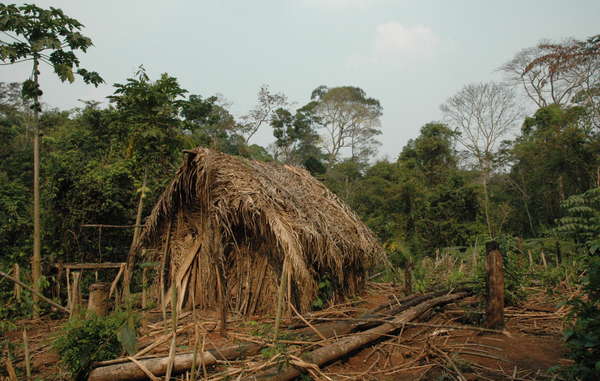 The ‘Last of his Tribe’s’ house and garden where he grows manioc and other vegetables. Very little is known about this uncontacted Indian. He lives on his own in a patch of forest, surrounded by cattle ranches and soya plantations in the Brazilian state of Rondônia.
© Survival

FUNAI became aware of his existence around 1990 after they found evidence of destroyed houses; the type of huts the man builds. Despite a targeted attack by gunmen in 2009, he has survived thanks to FUNAI’s enforcement of the legal order protecting his territory. This is now under threat. 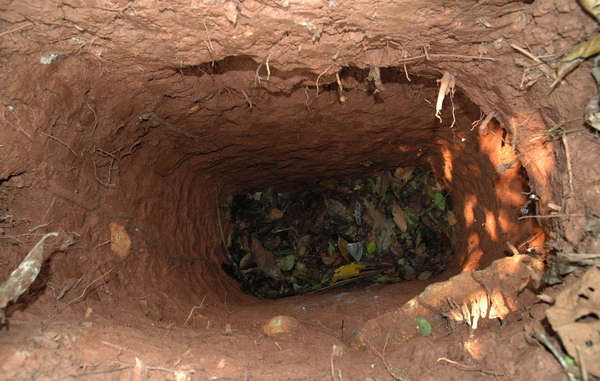 The man digs deep holes to trap animals and to hide in. He is believed to be the only survivor of a tribe massacred by ranchers in the 1970s and 1980s.
© Survival

This region is one of the most violent in Brazil, an issue likely to increase in the run up to presidential elections in Brazil this October, and FUNAI’s budget has been severely slashed. Survival International, the global movement for tribal peoples, has lobbied the government for years to protect his territory in the face of repeated attempts by surrounding ranchers to invade. 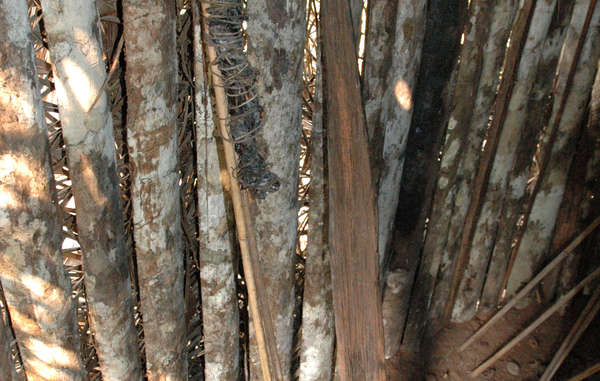 Resin torch and stake made by ‘The last of his tribe’, found by FUNAI in his house, Tanaru territory, Rondônia state, Brazil, 2005.
© Fiona Watson/Survival

Footage like this is vital in the ongoing struggle to protect uncontacted peoples, who are the most vulnerable peoples on the planet. FUNAI must prove he is still alive to retain the restriction order protecting his land, otherwise, the ranchers who surround the territory will move quickly and violently to grab the land.

Altair Algayer, head of the FUNAI (government) team monitoring the man’s territory, says: “This man, who none of us know, and who’s lost almost everything, including the rest of his people, proves it’s possible to survive and resist contact. I think he’s better off as he is than if he’d made contact.”

Stephen Corry, Director of Survival International says: “Uncontacted tribes aren’t primitive relics of a remote past. They live in the here and now. They are our contemporaries and a vital part of humankind’s diversity but face catastrophe unless their land is protected.

“The terrible crimes that have been committed against this man and his people must never be repeated, but countless other uncontacted tribes face the real prospect of the same fate unless their lands are protected. Only a major groundswell of public opinion can even the odds in favour of their survival, against the powerful agribusiness interests who want nothing more than to steal uncontacted tribes’ land, at the expense of their lives.”

The Future of Amazon: What’s Next for the Market Giant?