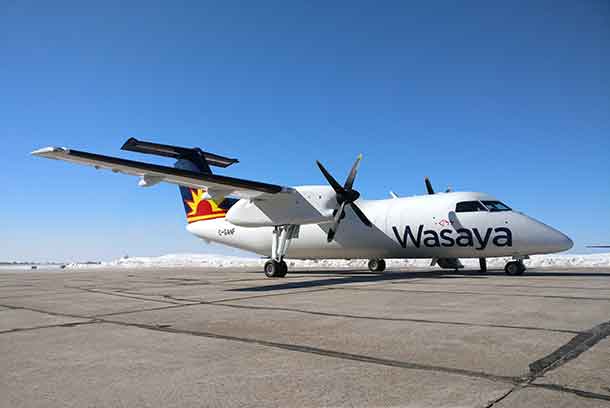 Thunder Bay, ON – Wasaya Airways has announced an exciting addition to their fleet, the World’s first Dash 8-100 Package Freighter (PF).

The Dash 8-100PF is a converted passenger to freighter aircraft. The conversion has been accomplished by Voyageur Aviation Corp. of North Bay, Ontario. Voyageur designed the Dash 8-100PF to offer an economically sound option in the regional aircraft freight market. With a 10,000 lb payload, the aircraft moves more cargo, faster and at a lower unit cost than other freight aircraft operating in the region.

“The addition of the Dash 8-100PF is an innovative game changer and an essential strategic advantage for Wasaya in our new business model,” said Michael Rodyniuk, President and Chief Executive Officer of Wasaya. “The Dash 8 100PF is built and converted here in Canada, designed for our rugged environment and perfectly suited to move cargo into and out of our remote communities with short, unimproved, gravel airfields. The Voyager team has done an amazing job developing this cost-effective program for us, taking the DHC-8 100 passenger aircraft and converting it into an effective Cargo aircraft with great range, payload and operational efficiency. This aircraft gives Wasaya a unique competitive advantage, helping us in our mission to improve the quality of life for the people living in communities we serve by reducing the cost of delivering essential goods like groceries, fuels and building materials, into the Canadian North.”

The official unveiling and presentation of the aircraft takes place Thursday April 20th at Voyageur Aviation Corp. in North Bay, Ontario beginning at 11:30am. The aircraft is completing final regulatory approval from Transport Canada and will be delivered to Thunder Bay in May. This is the first of two Dash 8-100PF’s Wasaya will add to their fleet this summer.