THUNDER BAY – COLUMN – Yesterday while in Koochiching First Nation; this is a small treasure I found in an abandoned schoolhouse, that had a big impact on my determination and resolve about what needs to be said, what needs to be done, and who is accountable for what! As the Ontario Regional Chief I am accountable to the Chiefs and their citizens and I take direction from the Political Confederacy. ‪#‎Koochiching‬ FN needs Canada to stop the inhumane neglect and start paying attention.

I was so “angered” at Canada, namely the office of AANDC and the Prime Ministers Office. Canadians, unfortunately wear the label as a‪#‎RacistNation‬ via the full implementation of the Indian Act. The ‪#‎Poverty‬ in Koochiching FN is evidence that something must be done Now!

In the last 20 years, government funding at Koochiching had depleted, and what was once funded through INAC for this small remote community, was removed. Today, homes are abandoned, roads are mere ATV trails, and there is no water and sewer – the approximate 30 people who reside there – live poverty in the extreme; BUT remain steadfast to protect, preserve and push on so that their next generation will not be left without their connection to a homeland. The Koochiching People are true protectors of the land. 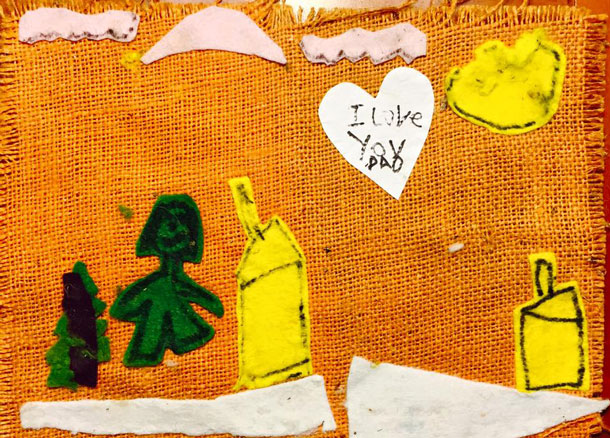 The Picture: A burlap art piece I call “A Child’s Love” – describes the resilience of a child’s heart and innocence that looks at the world as a place to behold, truly a gift from the Creator. This child says ‘I love you dad’. I can’t even begin to describe what I think and feel, and what anger stirs in me when I think about the assimilation policies that exist, still today, to drive our people from their homelands or to assimilate communities beyond what is rightfully a people’s sovereign right to be fully self-determined.

Chief William Harper, a strong determined man says, he won’t give up!!

Grand Chief Alvin Fiddler and I will renew efforts to advance and coordinate an advocacy plan to get to the bottom of a few unanswered questions. In the days and weeks ahead in this ‪#‎FederalElection‬ campaign, I will raise some questions: are the 3rd-world conditions in remote northern First Nations necessary; are they clearly understood and known to be part of the “Canadian” experience; and, what can we do to push forward change, even if it’s gradual?

WHAT are CANADIANS and their respective jurisdictions prepared to do to face this problem!!!

I have worked with Grand Chief Alvin Fiddler to begin an action plan. The plan is supported and being directed by Chief William Harper – who said; “I cannot give up on my community.” I admire his strength, humility and love for his community.

As we flew into the east end of Sandy Lake to go into the community, we were greeted by three Eagles. The Chief also greeted us at his humble landing structure – we visited, toured poverty in full degree, discussed a plan, and we prayed and had a nice meal.

The small community caught the fish for our feast and prepared it with their heart – a gesture of kindness and kin!

This piece of art made by a child, left on the floor as a message for us all; love for humanity, family and a strong community are most important to a child and in the least; is a right that every child on the land should have protected! That is our responsibility!

The visit was one where I found Strength, Humility and Love – literally!