GINOOGAMING FIRST NATION – Chief Celia Echum of Ginoogaming First Nation stands in the line at the “Tea’N’Bannock” food vendor on the second floor of the Hershey Centre Arena in Mississauga. She has come here for primarily the same reasons as the other grandparents present in the building have: to support their grandchildren’s hockey.

Celia’s grandson Logan, who is playing on the Ginoogaming First Nation Winterhawks Atom (ages 9-10) team, is an energetic player who is having fun in the stands nearby, watching some games with his teammates. It will soon be his turn to play. Another of Celia’s grandchilden, Ashanti Echum, is also here at the tournament playing for the Tykes (ages 4-6) team. It is a busy time for this chief who is driving around from arena to arena in support, and so it is very important for her to be here, as with the other Elders of the community who have likewise made the trip.

Furthermore, as usual, Celia’s other main focus is also on her many community members who have made the trip all the way from their northern Ontario community, located near the Town of Longlac.

Celia is perfectly capable of wearing both hats (grandmother and Chief) simultaneously. She sits in the stands of various arenas and watches all games, and keeps an open eye for all of her members present, and is always open to assisting all.

This commitment to the children’s hockey is just the way things are at Ginoogaming. It is the way they always have been, for decades. Celia’s son Derek is coach of the Atom (ages 9-10) team.

The Ginoogaming First Nation Winterhawks were represented in this year’s Little NHL Tournament by three different teams: Tyke and Atom, as well as Novice, which consists of children ages 7-8.

Derek and his wife Lisa have worked tirelessly over the past several months in preparing for this adventure for the community children’s three teams, which included several players from Long Lake #58 First Nation (a sister community across the lake), as well as pickups from other First Nation communities. Through Ginoogaming’s efforts, many children are given the opportunity to participate in this tournament.

But it has been an all-encompassing community affair, with various fundraising efforts involved, from a diverse cast of leaders: Ginoogaming First Nation community members April Dore, Graham Echum, and Whitney Echum have all taken lead roles in ensuring that the young children have this opportunity. It is an amazing effort from such a small community (population 168).

Working Together at the Little NHL Tournament

Other Ginoogaming community members who have spearheaded fundraising drives include Shelley Wesley, Roberta Mendowegan, Cassy Echum, and Marianne Echum. In a true grassroots community effort whereby all community members pull together, they are united in a common goal. They utilize prize bingos, as well as Ginoogaming’s famous, widely-attended “Monster Bingo” which offers thousands and thousands of dollars available in cash prizes to lucky winners.

Rounding out the list of dedicated Ginoogaming volunteers is Vanessa Legarde and Chelsea Echum. The community is relentless in their commitment to the young children: 50/50 draws, basket draws, and anything else they can come up with is employed.

The community also retains much support through application to their own Ginoogaming First Nation Timber Claim Trust Fund. As annual attendance at the Little NHL Tournament has become a March Break tradition over the past decades, Ginoogaming has taken to sending teams each and every year, for the past 30 years, to this tournament. It would be hard to imagine a Little NHL Tournament without Ginoogaming First Nation Winterhawks teams registered and attending, and thanks to the Timber Trust account they are able to easier facilitate this support for the children.

The community also made use of Dreamcatcher Fund applications, for which they are very grateful, and also in-kind funding from the Ginoogaming First Nation band administration.

It is a Concerted Community Effort

Moreover, the efforts stretch beyond mere fundraising: several adults have gone even further, and have attained NCCP (National Coaching Certification Program) certification in recent months: Cassy Echum, Leonard Ferris, Marianne Echum, Bridget Echum, Sasha Michano, and Levi Echum all graduated from the course in order to volunteer as coaches for the children.

In her role as Youth Recreation Coordinator, Sasha even was able to have Toronto Maple Leaf Sports & Entertainment send “The Right to Play” program coaches to Longlac in order to conduct a four-day hockey school for the children in January.

It would appear that the dedication to the children’s needs is without end in Ginoogaming. The group also attained the necessary “Respect in Sport” certification which is also known as “Speak Out.” Required of all coaches, trainers and managers, the training is focused on ending abuse in sport. Celia’s community leaders have clearly followed her lead in devotion, dedication, and commitment to others.

Where does all of this activity stem from, one may ask?

The answer to that question is very interesting, and carries a bit of history and local lore. 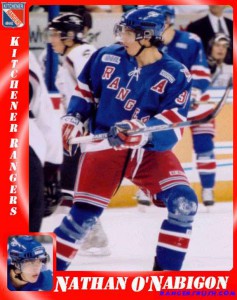 The annual Little NHL Tournament actually has very deep roots in Ginoogaming First Nation, with success stories such as Nathan O’Nabigon arising from the homegrown hockey talent pool. O’Nabigon’s hockey career included 29 games with the Plymouth Whalers of the Ontario Hockey League (2000-01), another 115 games with the OHL’s Mississauga Ice Dogs (2001-03), and then another 119 games with the OHL’s Kitchener Rangers (2003-04).

O’Nabigon then spent four years playing for the University of New Brunswick (2004-08) in the AUS (Atlantic University Sport) where he completed his education, in addition to five succeeding years in the Canadian Hockey League with the Rocky Mountain Rage in Colorado (2008-09), the Allen Americans in Texas (2009-10), the Missouri Mavericks in Independence, near Kansas City (2010-12), and the Arizona Sundogs (2011-12). Young hockey players at the Little NHL Tournament fantasize about where such a hockey journey in life such as this can take them, and O’Nabigon has brought it close for Ginoogaming and Longlac-area players especially.

This success of Nathan O’Nabigon is the stuff of dreams that rests on the nightly pillows of these young hockey players: to see a local Ginoogaming First Nation community member, an Anishnawbe person from the Longlac area in northern Ontario, make it to such levels and also complete a post-secondary education in the process.

Another factor making it all the more thrilling: O’Nabigon was also invited to participate in a Toronto Maple Leafs tryout camp in 2003. Dreams of young hockey players indeed: to have that chance and opportunity.

Local Longlac children and youths regularly discuss how O’Nabigon scored the overtime goal that sent his team, the Kitchener Rangers, to the OHL Western Conference Finals in 2003. As a result, at the age of 20 he was able to be an instrumental reason why the Rangers won the Memorial Cup that year. The children and youths duplicate this success in their Little NHL exploits in thrilling overtime situations. Spectators are often kept on the edge of their seats when watching the Little NHL Tournament action.

That OHL goal, however, was only one of two overtime goals that O’Nabigon scored for the Rangers that playoff year, adding to his local legend. In addition to being named the OHL Player of the Week earlier in December 2002, it was another stepping stone on his path to success.

Like many Ginoogaming First Nation children, O’Nabigon (born in 1983) started playing hockey at the age of 4 and attended Little NHL Tournaments with the support of his parents and community. Needless to say, he is a leading role model to all youth in the Town of Longlac and in the surrounding First Nation communities (Ginoogaming and Long Lake #58). He is evidence that they can do it. What better place to showcase this than the Little NHL Tournament in Mississauga?

Thus, when Chief Celia Echum and her community leaders attend the Little NHL Tournaments with children and youth, it is therefore quite clear what is in the back of everyone’s minds: success, but more important than that, fun and memories for the children and the families in a long-running annual community tradition stretching back decades.

The adult community leaders in Ginoogaming will continue to work all year, every year, under the leadership of Chief Echum in order to send the children to this tournament so that their hockey dreams may be pursued. That is commitment to community, youth and children, and the hallmarks of good direction in the true Anishnawbe way of working together with a common goal.