THUNDER BAY – MINING – PREMIER GOLD MINES LIMITED (TSX:PG) (“Premier”, “the Company”) has announced that it has entered into an agreement to increase to 100% its interest in the past-producing Hasaga Property, located in Red Lake, Ontario, from Goldcorp Inc. (TSX:G, NYSE:GG) (“Goldcorp”) . In exchange, Premier will assign to Goldcorp its 35% participating interest in the East Bay Property (Red Lake) and its 100% interest in the PQ-North Property located near Goldcorp’s Musselwhite Mine in Ontario. The Rahill-Bonanza Joint Venture will remain in good standing with Premier continuing to hold a 49% interest. 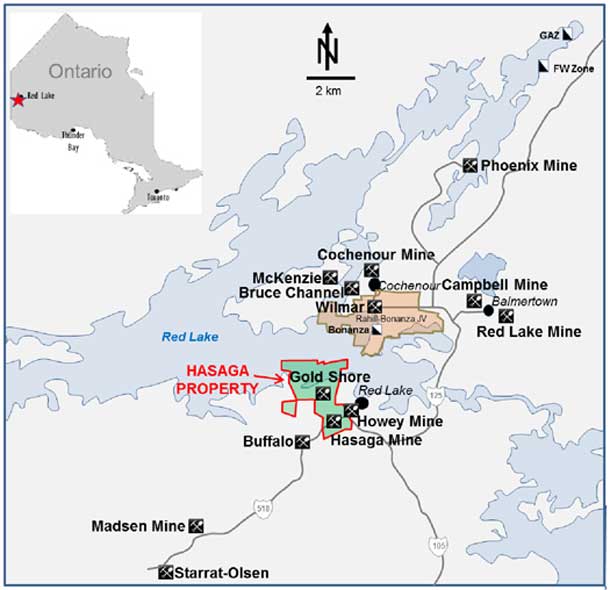 The arrangement positions Premier to secure 100%-ownership in an under explored, target-rich property. Key highlights of the opportunity include:

The Hasaga Property is located (see Image 1) in the heart of the Red Lake Mining camp that is host to numerous multi-million ounce producing and past-producing mines.

“The Hasaga property acquisition is consistent with our strategy to acquire assets in mine-friendly jurisdictions with proximity to infrastructure,” stated Ewan Downie, President and CEO of Premier. “This transaction streamlines our asset portfolio while increasing our flexibility to explore and develop core regional interests. The Hasaga Property has seen only limited exploration since the mine was closed in the early 1950’s and reminds me of the opportunity we saw when acquiring the Company’s Hardrock Property in 2008.”

Premier expects to begin a drill program at Hasaga in 2015 and will direct its initial exploration on advancing the open pit target areas. A presentation for the Hasaga Property can be found on the Company’s website www.premiergoldmines.com.

The East Bay Property is host to the prospective GAZ and Footwall gold zones that have been the subject of multiple drill programs since 2000. The PQ-North Property is strategically located along the northern extension of the main Musselwhite iron formation where Premier had previously identified several gold zones that are open for expansion. Premier will retain a 2% Net Smelter Royalty (NSR) in the PQ North Property.

Premier Gold Reports on Updated PEA for the McCoy-Cove Property