THUNDER BAY – ENTERTAINMENT – Shawn Bernard is an award winning Anishinabek musician. A few years ago, Shy-Anne hosted a show at the Thunder Bay Community Auditorium. One of the headliners was Shawn Bernard.

Shawn is a powerful singer, and shared his story, coming out of the depths of the hardest parts of life, to the stage. His music is edgy, sexy, and inspiring. It combines his culture, and the modern world.

A few months ago, after being very quiet for a few months, Shawn shared the reasons for his silence.

In his own words, he had done something foolish, and was paying the price for it. He had given a ride in his vehicle to some friends who were intoxicated. They had started to fight in the backseat of his car.

On his way to Saddle Lake, Alberta to do a performance and motivational speech, he passed through Edmonton and attended a talent show at IHuman Youth Society to show his support. Afterwards, he gave a ride to his ex in-laws who were intoxicated. While driving, Shawn was brutally stabbed in the neck. Rushed to hospital, fading in and out of consciousness he was unaware of how critical his condition was. He is now a quadriplegic, unable to feel from the chest down with minimal use of arms and hands.

Shawn was stabbed in the neck. He somehow managed to drive to the hospital. His injuries unfortunately were far worse than he could have first thought.

Today, Shawn Bernard is confined to a wheelchair. Shawn’s legs are stilled, and he is left with the struggle of trying to move forward in his life.

His friends have taken up Shawn’s struggle to help him and his family. 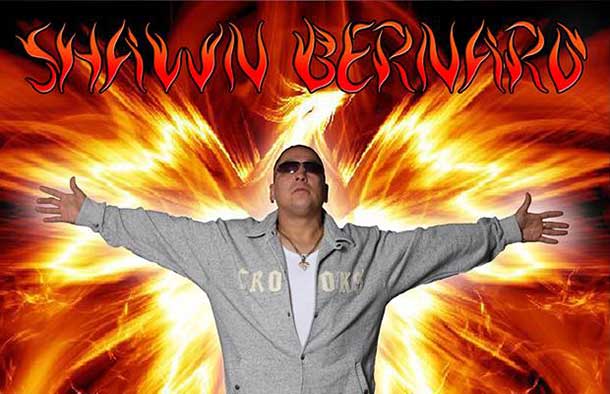 From friends of Shawn, “Shawn Bernard’s performing name is Feenix and as you will read, the meaning of the Phoenix relates directly to Shawn’s life.

“In Classical mythology the Phoenix is a unique bird that lived for up to 600 centuries. After this time it would consume itself by fire then rise again, renewed from its own ashes. The Phoenix symbolizes renewal, rebirth and new beginnings.

“Shawn can be described as a leader, role model, survivor and hero among many other positive attributes. Now, confined to a wheelchair, Shawn explains how truly humbled he is, going from fully independent to relying almost completely on professionals, nurses, aids, family and close friends to help him with daily activities that come as second nature to most of use, often taken for granted.

“Shawn grew up on the inner city streets of Edmonton, Alberta. He recalls from an early age living amongst family members caught up in the destructive cycle of addiction, alcoholism and prostitution. He lost his Mother at age 4 and Father at 17. Growing up, Shawn became involved in a high risk, negative lifestyle. Though, in the midst of active drug addiction music became an outlet for him and he began writing lyrics that reflected his life and feelings. Shawn had dreams of recording his music and performing live for audiences. He would rap (freestyle) with friends to beats recorded on a tape. Others were drawn to his talent, words and charismatic nature. He formed a rap group that later evolved to a nationwide gang. Shawn continued to live this way until one day, while one of his incarcerations in jail, he lost his beloved sister Chrissy to an overdose. At the same time two of his son’s were taken into foster care and on the verge of becoming under a permanent guardianship order. Feeling helpless, Shawn made some important, life altering decisions. With the help of an Elder, positive supports, hard work and determination he was able to turn his life around.

“Up until 5 months ago, Shawn was residing in Calgary, Alberta and employed as a Community Youth Outreach Worker in Wabasca, Alberta, a remote northern community where poverty, addiction, abuse, and gangs are predominant.

“Shawn used his own life experiences to implement programming for youth.

“He traveled across Canada visiting rural and urban communities doing performances; sharing his music.He also did motivational speaking and mentor-ship for all to stay positive and away from negative influences, inspire, motivate, create opportunities, help others to change their lives, maintain healthy living; free from drugs, alcohol, the streets, gangs and other high risk activities. He had recorded several albums promoting positivity. He’s been nominated and won several awards for his music. Has toured performing his music.

“Shawn Bernard has overcome adversities many others haven’t been fortunate enough to. He’s battled with and defeated addiction, struggled with poverty and racism, found his way out of a high risk lifestyle.

“As a result of his condition, Shawn has lost employment and is financially dependent on AISH as his only income.

Today, Shawn Bernard resides in a rehabilitation centre in Edmonton, Alberta. His family; wife and four children have had to relocate here from Calgary, Alberta.

In a sad reality, right now his family is homeless. They are relying on the kindness of family members to temporarily house them. After paying $1800 a month to stay at the rehabilitation centre, Shawn is left with $300 a month to support his family.

His wife, who takes care of their children often does temp work to supplement their minimal income.

Because of prior financial obligations, Shawn’s debt is increasing at an alarming rate, burdening him with stress and a feeling of helplessness.

He is unable to leave the care centre because he does not have a home to go to. Due to poor credit rating it is next to impossible for Shawn and his wife to find a home, especially one that is wheelchair accessible.

There have been a couple of attempts to raise money to help Shawn and his family and although all involved have had good intentions and worked hard, the attempts haven’t been as successful as expected. To date, Shawn has raised $618. Though Shawn and family were grateful for that financial help, he is far from reaching a goal that he fears is impossible.

At a time when Shawn’s goals and dreams were becoming a reality he is faced with obstacles and challenges beyond his wildest imagination.

But Shawn still manages to be an inspiration to many.

“Immediately following the stabbing, he was determined to still follow his dreams. Confined to a hospital bed and with the help of his wife, family and close friends, Shawn filled out the necessary forms, obtained a copy of his newly released album, “Living Like Stars” and submitted his entry to the Aboriginal Peoples Choice Music Awards (APCMA)”.

“Shawn is currently nominated for “Best Rap/Hip Hop Album” and is set to travel to Winnipeg, Manitoba to perform on stage one of the songs from his album”.

“In the face of tragedy, Shawn Bernard is still going above and beyond to show his family, supporters and fans that he could rise again and in the process is giving hope and showing courage, bravery, motivation and success.

Shawn’s friends have started a GoFundMe campaign to help.

They say, “Now, Shawn is in a situation where all, any help would mean the world to him. Let’s show our support, compassion and generosity to a man and his family who will be forever grateful for your help.

“Let us be the ones who help Shawn rise to light from darkness and live up to his performing name, Feenix (the Phoenix), once again.”

If you would like to help this talented and determined man and his family, visit: Support Shawn Bernard on GoFundMe.

Musical performances and Award presentations will liven up the MTS Centre in Winnipeg as the 9th edition of the APCMAs unfold September 12. This event honours the best in Aboriginal music from across North America as chosen by the public, and will be co-hosted by the original Lorne Cardinal and comrade Ruben Littlehead.

APTN LIVE FROM THE RED CARPET LIVE Stream: APTN’s special webcast will precede the APCMAs again this year. Hosts Maika Harper and Kyle Nobess of APTN’s newest show Mohawk Girls will mingle with the nominees and guests as they make their way down the Red Carpet.

ABORIGINAL PEOPLES CHOICE MUSIC AWARDS LIVE Broadcast: APTN will bring the Awards to Canada via the LIVE on-air and online broadcast of the APCMAs. This two-and-a-half hour special will air on APTN and APTN HD at 8:00 p.m. ET on Friday, September 12, 2014.

Meet Darius Bell, aka FlossMobChase, taking over the American hip hop world as a passionate rapper