THUNDER BAY – A fast melt of the massive amount of snow in Thunder Bay and across Northern Ontario could cause flooding issues. The Lakehead Regional Conservation Authority in Thunder Bay is responsible for flood forecasting in Thunder Bay. 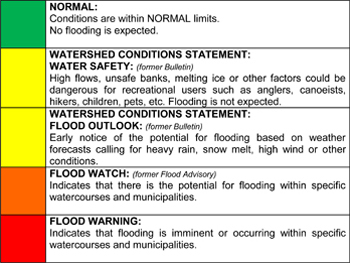 The current conditions in Thunder Bay and across Northern Ontario are safe. There are NO Flood Warnings.

Communities including Attawapiskat, Kashechewan, Fort Albany, and Fort William First Nation have all experienced flooding as a part of the spring melt.

Conservation Authorities will issue reports on a regular basis.

In Thunder Bay, preparations have been underway. At the Atlantic Avenue Water Treatment Plant, workers are ready for any major water issues. Screens have been cleared, and staff is prepared.

In 2012, the Water Treatment Plant was flooded, and that led in part to the flooding of homes in Northwood, the East End, and other parts of Thunder Bay.

Dealing with flooding or other natural disasters

Emergencies are managed first at the local level – for example, by first responders such as medical professionals and hospitals, fire departments, the police and municipalities.  Local authorities who need assistance request it from provincial or territorial governments.  If an emergency escalates beyond their capabilities, the province or territory may seek assistance from the federal government. Public Safety Canada led the development of the National Emergency Response System (NERS) with provincial and territorial officials, which was approved by Federal/Provincial/Territorial Ministers in January 2011. The NERS enables coordinated efforts in responding to emergencies.

The Government Operations Centre (GOC) is the principal means by which the Minister of Public Safety and Emergency Preparedness’ leadership role in establishing an integrated approach to emergency response is exercised.  Housed at Public Safety Canada, the GOC, on behalf of the Government of Canada, supports response coordination of events affecting the national interest.  It brings all partners into a common environment to harmonize and synchronize collective actions of those partners. The GOC operates 24/7 to provide watch, warning, analysis, planning, logistics support and coordination across the federal government and with its partners, including provincial and territorial governments, non-governmental organizations, the private sector, and international partners.

For Thunder Bay the forecast is calling for warm temperatures for the next week.

The Lakehead Regional Conservation Authority along with the Province of Ontario and the City of Thunder Bay will be keeping people up to date on the latest conditions.