Home Business Prices For Fruits and Vegetables Could Sky Rocket 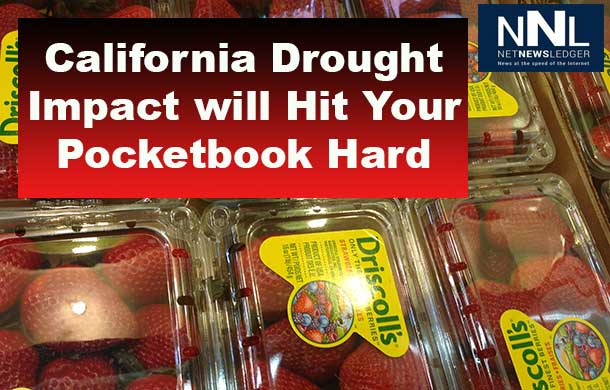 Both the State of California and the American federal government have announced that there is no extra water for farmers in the drought zone.

On Friday, President Obama headed to California to tour drought-affected areas and talk to those affected by impacts of one of the state’s worst droughts in over 100 years. While there, President Obama announced new actions that the Administration will take to help the farmers, ranchers, small businesses, and communities being impacted.

The President said, “First, we’re accelerating $100 million of funds from the farm bill that I signed last week to help ranchers. For example, if their fields have dried up, this is going to help them feed their livestock.

“Second, last week, we announced $20 million to help hard-hit communities, and today, we’re announcing up to $15 million more for California and other states that are in extreme drought.

“Third, I’m directing the Interior Department to use its existing authorities, where appropriate, to give water contractors flexibility to meet their obligations.

“And fourth, I’m directing all federal facilities in California to take immediate steps to curb their water use, including a moratorium on water usage for new, non-essential landscaping projects.”

The President is sharing the good news. It is not all good news, Friday, federal officials announced the Central Valley Project, which is the state’s largest water delivery system can not provide any water this year to Central Valley farmers.

The President received critical commentary from some for playing a round of golf during his visit. Golf courses are large consumers of water, and in a state where pressures on water demand are causing serious issues, golf is seen by many as a luxury.

The federal government also states that they will be able to supply only half of the water that they are contracted to deliver to Santa Clara and Contra Costa counties.

The news means that California farmers won’t have the water to run their irrigation systems, and many simply will not be planting or harvesting a crop this year. The impact at the supermarket will be huge.

“We estimate that more than 500,000 acres of farmland will be idled this year due to water supply shortages, said Mike Wade, executive director of the California Farm Water Coalition. This is the result of multiple dry years and federal environmental policies that prevent the full use of agricultural water supplies from being used for purposes for which they were intended – to grow food.

“Agricultural water supply shortages harm more than just the farms that produce hundreds of varieties of food, fiber and nursery products, Wade added. Unemployment may hit 15,000 seasonal and full time agricultural workers if this year’s drought has the kind of impact on the economy that occurred in 2009. Water shortages then led to idling of 269,000 acres and over 7,400 workers, about half of the expected impact of this year’s drought.

“Consumers throughout the country have a right to be concerned about the safety, price and reliability of their food supply. California produces almost half of the nation’s fresh fruits and vegetables and without adequate water in California, food supplies from other states or other countries may be the only option to fill the gap.”

This story is likely to be one that continues to impact the United States, and California which is one of the world’s top ten economies.