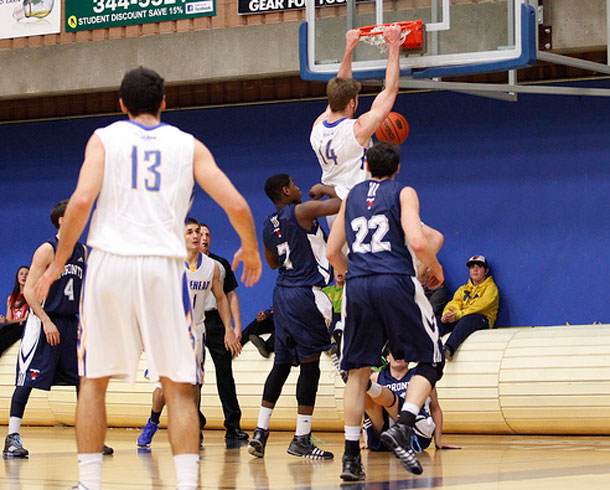 THUNDER BAY – LU Sports – The Lakehead Thunderwolves men’s basketball team came out on top, 75-55, against the U of Toronto Varsity Blues on Friday evening, marking their first home victory of the ’13-14 regular season. The ‘Wolves opened up the game 15-9 after the first quarter, with both teams slow to get into their offensive flow. All nine Toronto points belonged to Dylan Churchill, courtesy of three 3-pointers. Churchill would finish with 15 points.

The ‘Wolves showed a new line-up in playing both 7-footers, Brent Wallace (Brisbane, Aus.) and Andrew McCarthy (Scituate, Mass.) simultaneously during parts of the second quarter. Wallace would get into foul trouble and eventually have to sit, but not before a dunk and a blocked shot to his credit. McCarthy had a breakout game, going 7-of-7 from the field for a team-high 16 points in 21 minutes of play, his best output yet as a Thunderwolf.
Toronto kept within striking distance until the fourth quarter when Lakehead would run away with the game in the final 6 minutes.
The Blues were led by Alex Hill with 21 points (12-of-16 FT), while Dakota Laurin grabbed 8 rebounds.
Top scorers for Lakehead were Andrew McCarthy and Anthony McIntosh with 16 points apiece. Dwayne Harvey added 15 points with 7 rebounds and 6 assists. Igor Lebov had 8 points and 8 rebounds.
Coach Matt Erdman stated, “The boys did a great job of sticking to the plan and responding when Toronto made a run. It was a full team effort and it started with a solid week of practice. Everyone contributed in their own way. Tomorrow is another opportunity to build and get better as a unit.”
The men’s team take on the Ryerson Rams tomorrow evening at 8:00pm in the Thunderdome.
Webcast coverage available via SSN Canada
Audio Broadcast available via LU Radio 102.7 FM