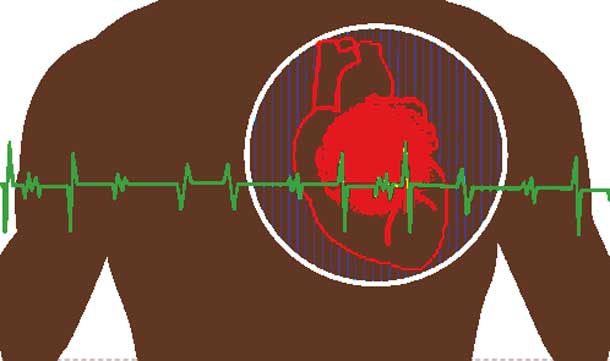 THUNDER BAY – Northwestern Ontario ranks higher in cardiac problems, and heart attacks than most of Ontario. Climate and other factors have been impacting cardiac care.

Sudden cardiac death (SCD) secondary to ventricular arrhythmia is the most common cause of mortality from cardiovascular disease worldwide. Despite decades of investigation, a thorough understanding of triggers and effective pharmacologic treatments for SCD are lacking and the primary treatment remains mechanical defibrillation. This sobering reality has led to the view that a complete re-examination of the fundamental mechanisms underlying the development of SCD is needed to provide a foundation for the development of novel, effective therapies.

Biological processes that oscillate with a 24-hour periodicity are termed circadian. All cells have a circadian clock that synchronizes changes in gene expression with rhythmic patterns of daily life, i.e. eating or sleeping. The observation that SCD exhibits a peak during early morning, is increased in shift workers suggests that circadian influences may be operative. However, a direct link between the circadian clock, metabolism, and cardiac electrical activity was lacking.

In this regard, recent studies from our laboratory identified the first molecular link between endogenous circadian rhythms and SCD. Specifically, we reported that a specific cardiac ion channel that controls myocyte repolarization exhibited circadian oscillation under the control of the clock-dependent oscillator KLF15. Alterations in KLF15 levels in vivo rendered animals susceptible to SCD. Finally, the observation that KLF15 is altered in subjects with heart failure and Brugada syndrome suggests that the study of this pathway may have implications for human disease.

Evidence from people with heart disease strongly supports the existence of the molecular link first discovered in laboratory mice between the body’s natural circadian rhythms and cardiac arrest or sudden cardiac death (SCD) — the No. 1 cause of death in heart attacks, a scientist said here today.

The research, which offers the most focused explanation ever for SCD’s predilection for the morning hours, was part of the 246th National Meeting & Exposition of the American Chemical Society (ACS), the world’s largest scientific society. The meeting, which features almost 7,000 reports on discoveries in science and other topics, continues through Thursday in the Indiana Convention Center and downtown hotels.

Mukesh Jain, M.D., who reported on the research, said that it pinpoints a previously unrecognized factor in the electrical storm that makes the heart’s main pumping chambers suddenly begin to beat erratically in a way that stops the flow of blood to the brain and body. Termed ventricular fibrillation, the condition causes SCD, in which the victim instantly becomes unconscious and dies unless CPR or a defibrillator is available to shock the heart back into its steady beat.

“Sudden cardiac death due to this electrical instability causes an estimated 325,000 deaths annually in the United States alone,” Jain explained. He is with Case Western Reserve University in Cleveland. “That includes the 3 out of 4 heart disease deaths in people aged 35-44. In all too many cases, there is no second chance. The first event is the last event. Our research points the way toward possible ways of easing that toll — new drugs that could reduce that risk, for example.”

One of the deepest mysteries about SCD has been its timing. Health experts have known for more than 30 years that the erratic heartbeat responsible for SCD strikes most often at certain times of the day. The peak risk hours range from 6 a.m. to 10 a.m., with a smaller peak in the late afternoon. Scientists long suspected a link between SCD and the 24-hour body clock, located in the brain. It governs 24-hour cycles of sleep and wakefulness called circadian rhythms that coordinate a range of body functions with the outside environment.

Jain’s group discovered a protein called KLF15 that helps regulate the heart’s electrical activity, and occurs in the body in levels that change like clockwork throughout the day. KLF15 helps form channels that allow substances to enter and exit heart cells in ways critical to maintaining a normal, steady heartbeat.

They first discovered that patients with heart failure have lower levels of KLF15. Then, they established in laboratory mice that KLF15 is the molecular link between SCD and the circadian rhythm. And mice with low levels of the protein have the same heart problems as people with SCD. “It turns out that people with low KLF15 levels are the ones that are most susceptible to these sudden death episodes that occur in the early morning hours,” said Jain. “So, we think that if we could in some way boost KLF15 levels in patients with heart problems, maybe we can reduce the occurrence of these arrhythmias and SCD.”

Jain’s group is currently studying drugs that boost KLF15 levels. The protein also has effects on other body processes, however. “If we can find out how these compounds are boosting KLF15 levels, then maybe we can make much more targeted and specific therapies for the heart that would prevent SCD, but leave the other KLF15-related processes alone,” he explained. Other groups are working on developing genetic tests to identify people who have mutations in the KLF15 gene and would likely be at higher risk of SCD, he noted.