Home Entertainment When the Light’s Go Out – The Other Colour 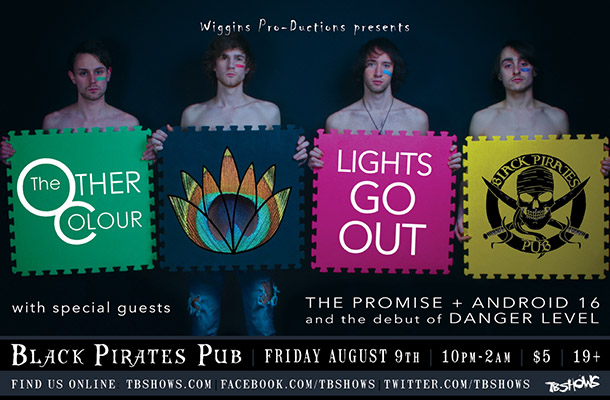 THUNDER BAY – Entertainment – After relocating to Toronto in 2011, homegrown rock band, The Other Colour will be hitting the stage of Black Pirates Pub, Friday, August 9 as part of their Lights Go Out welcome home show. Joining the guys will be special guests, The Promise (indie-rock), Maraday Park (pop-rock), as well as Danger Level (basement blues) who will be making their debut performance in Thunder Bay.

Since their formation in 2007, Stephen Gray (vocals), Taylor Perrault (guitar), AJ Astle (bass) and James Agostino (drums) of The Other Colour have been producing a melodious sound by blending sincere, emotional song writing with a definitive pop-rock sound. Their music is a result of exposure to a wide range of cultural and musical influences, resulting in the creation of songs with relevance, honesty, passion and integrity. Each member has a musical background, be it Lakehead University, Humber College or lead roles in musicals. This diverse element adds a unique flare to the band, quite frankly setting them apart from their contemporaries.

While continually writing and jamming, TOC have released two, five song EPs; 2010’s The Black EP, which features the fan favourite “Peacock Man”, and 2012’s The White EP, garnering much response in only it’s first weeks of release. Both were co-produced by the band. This past July members of TOC were involved in the Migliazza Production of Andrew Lloyd Webber’s Jesus Christ Superstar. Both Astle and Perrault played key roles in the live band, while Gray took the lead roll as Jesus Christ.

The boys are enthusiastic to be able to return to Thunder Bay and perform for their hometown fans. “We’re excited to come back to Thunder Bay to put on a show of our own” explains Gray, “we can’t get over how much love, support and talent there is here”.

The future is anything but black and white for The Other Colour, as they effortlessly continue to win over every crowd they play to. TOC have been invited to play alongside countless touring acts including Young Empires, The Arkells, Mariana’s Trench, Faber Drive, Sweet Thing, Ill Scarlett, These Kids Wear Crowns, Greater Than Giants, Acres of Lions, Hello Operator, Kiros, and Everlea.

Doors open for at Black Pirates Pub at 10pm. Cover is $5. Age of majority required. For more information visit www.TBshows.com.