THUNDER BAY – The Digital Age is upon us. How many people do you know who have a smart phone? A digital camera? An iPod? Digital cameras capture many things. Add in security cameras, and there are many ways that an incident can be recorded or documented.

Do something in public and chances are that you could end up with your face and actions recorded and shared across the world.

You might think that today, most people would realize that there is a pretty good chance that someone will have a camera and capture images.

It works. On Fort William First Nation, some misguided individuals tore up the Pow Wow grounds with their 4×4 vehicles, images captured when one of the drivers attempted to threaten a resident on the First Nation led to the person being caught.

In Vancouver, the Stanley Cup riots of a few years ago were captured online and on digital camera images. Dozens have been charged for their irresponsible actions.

Mac’s Crimebusters share security camera video of robberies at the iconic convenience store. Thunder Bay Police, as do police services across Canada share the videos with the public. More often than not, the identities of the robbery suspects are reported to police.

Many individuals are recording video and posting it online. In growing numbers of cases, bad behaviour captured in digital cameras are becoming a way to record, and assist police. 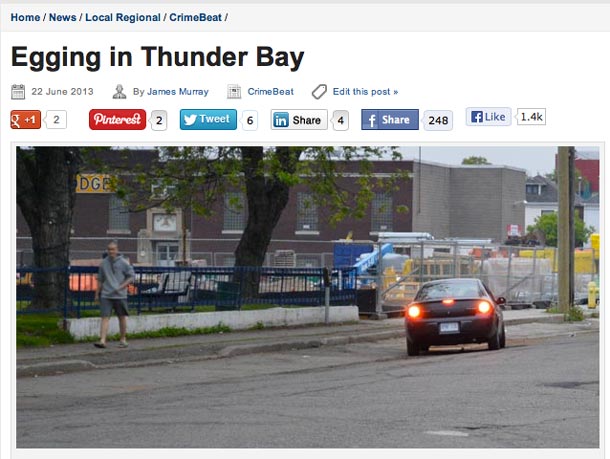 In Thunder Bay, ‘Egging’ or the ‘spoons game’ which see people in cars throwing things at pedestrians has been an all, sadly too common occurrence. On Saturday night, a driver and passenger in a car attempted to egg two pedestrians on May Street. The same vehicle ended up on Leith Street, where an individual got out and proceeded to assault four people.

The only thing the ‘Egger’ likely didn’t consider was having his image captured by a camera. Thousands of people have seen and shared the images.

The reality today is that if you are in public, chances are you are going to be captured in all your ‘digital splender’.

Growing numbers of people are carrying smart phones or iPods. Those devices have high definition video or picture quality. Often those pictures are as sharp as expensive digital cameras.

Many of Thunder Bay’s First Nations residents have expressed serious concerns about being the victim of drive-by egging or other stuff thrown at them. With a digital camera, the key is having it ready to capture the foolishness.

For many people, carrying a digital device, the next step is having it ready to capture foolish activity. It works, and it can help make our streets, one digital image at a time,  safer for everyone.