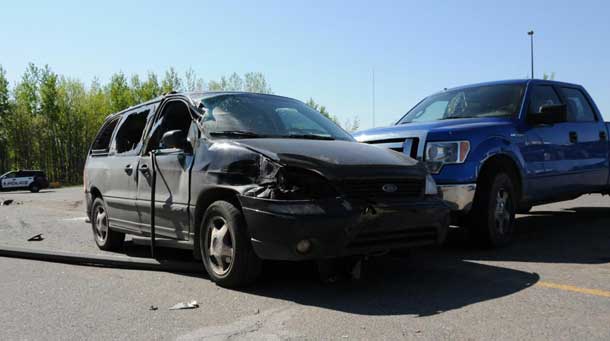 THUNDER BAY – Thunder Bay Police are seeking the driver of a transport truck that left a trail of smashed cars in the parking lot at the Landmark Inn.

Video cameras captured images of the truck making a turn in the parking lot and then striking a parked Ford Windstar while cutting the corner. The trailer hooked onto the van and dragged it along, causing it to smash into other parked vehicles. Three other vehicles were significantly damaged in the process.

If you watched Beverly Hills Cop last night on television, the scene might have been similar to the opening with the transport truck driver smashing cars and damaging property.

Thunder Bay Police had a quieter evening, likely in part due to the precipitation.

Police however are looking for public help to identify the robbery suspect in another Mac’s Store robbery. (Story Here)