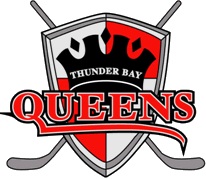 OTTAWA – The Thunder Bay Sportop AA Queens are off to the semifinals at the Ontario Women’s Hockey Association provincial championships in Ottawa. Entering the tourney as defending provincial midget AA champions, Thunder Bay advanced to the medal round after defeating the Sault Ste. Marie Wildcats 3-1 Saturday in semifinal action.

They will now meet the Saugeen-Maitland Lightning, who beat Whitby 2-1 in four overtimes, in one midget AA semfinal contest, which gets underway at 9:30AM.

Samantha Strassburger paced the Thunder Bay attack tallying twice against Sault Ste. Marie while Karli Nummikoski supplied the other. Serena Daniels, Michell Carlson and Azia Vass all chipped in with assists while Jayde Turcotte picked up the win making 12 saves for Thunder Bay who fired 18 pucks on the Wildcats net.

If they win that game they’ll play for a second consecutive championship and a berth in Esso Cup Canadian midget championship April 21-27 in Burnaby, B.C. in the title game at 2PM.

Should they fall in the semifinal they will skate for bronze at 2:30PM.

The North Bay Ice Boltz and the Nepean Wildcats will meet in the other semfinal match-up at 10AM.

The news wasn’t as fortunate for the Ontario Power Generation midget A side as they dropped a heartbreaking 4-3 decision to the Windsor Wildcats in overtime that resulted in an abrupt end to their season wrapping up play at the provincials with a 2-1-1 record.

That contest remained scoreless until the eight-minute mark of the second period when the Storm scored what would be only goal of the game.

Despite many scoring opportunities, Thunder Bay could not beat the North York netminder who stopped everything fired her way.

In turn Alyssa Aho also played a strong game in net for the Queens, allowing only the one tally against in the setback.

The club finished up at the provincials with a 2-2 overall record.

As for the Triad Contracting peewees their season also finished up Saturday with a narrow 2-1 loss to the Whitby Wolves.

After a scoreless opening stanza the Wolves struck first late in the second only to see Allyson Lesperance notch the equalizer, on a breakaway, with just seconds remaining in the session.

Whitby responded to win it late in regulation as they got the puck past Makenna Burke in the Thunder Bay net to gain the victory.