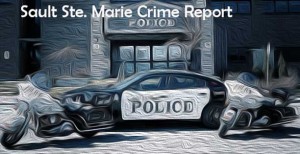 SAULT STE MARIE – Crime – Sault Ste. Marie Crime Report – The police in Sault Ste Marie report, “On February 27th, 2013 at 4:00 pm Police Officers were called to domestic dispute on in the central area of the city. Officers learned that a verbal argument between a couple escalated into a physical assault.  The victim did not require medical attention. Officers arrested and charged a 41 year old female for assaulting her spouse. She will appear in bail court on February. 28th, 2013″.

In another domestic dispute from February 27, 2013, a 30 year old female called police to report being assaulted by her boyfriend. Officers learned that on February 21st the accused, a 24 year old male, attended at the victims home and an argument ensued which ended when the accused assaulted the victim. The victim did not require medical attention. The male was arrested on February 27th at 4:30 pm and charged with one count of Assault and one count of Breach of Probation. He will appear in bail court on February 28th, 2013.

On February 26, 2013 at 9:45 pm Police Officers were at the Sault Area Hospital completing an investigation. While there on this investigation, hospital staff requested the assistance of the officers with a patient that was causing a disturbance. As officers were assisting hospital staff with the young person who was causing the disturbance, the youth punched one of the officers in the face. The officer received medical treatment for their injuries and was released from hospital. Subsequently the 16 year old young person was charged with Assault Causing Bodily Harm and will appear in youth court on April 9th.

On February 28, 2013 Police Officers were called to a residence on Albert St. East, Sault Ste. Marie Ontario with regard to an unwanted male. Once there Police Officers encountered Joseph Owl, age 22 of 222 Albert St. East. A police records checked showed that Owl was on a Probation Order not consume alcohol. As Owl had been drinking, he was arrested and charged with Breach of Probation. He will attend in court on April 18th, 2013 at 9:00 am.

Busy Week for Rainy River OPP with 254 Calls for Service