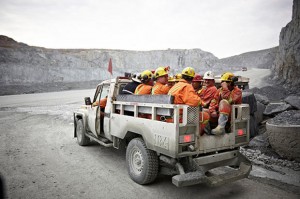 THUNDER BAY – Business – North American Palladium Ltd. announced that the company has filed a final base shelf prospectus with applicable securities regulators in each of the provinces of Canada and a corresponding registration statement with the United States Securities and Exchange Commission.

The filing is part of the Company’s standard course of business, to replace the shelf prospectus that expired in 2012.

The shelf prospectus allows NAP to make offerings of common shares (including flow-through shares), debt securities, warrants, and subscription receipts in an aggregate principal amount of up to US$300 million during the 25-month period that the shelf prospectus remains effective. The nature, size and timing of any such financings depend, in part, on NAP’s assessment of its requirements for funding and general market conditions.

This news release does not constitute an offer to sell or the solicitation of an offer to buy securities in any jurisdiction. A registration statement relating to these securities has been filed with the United States Securities and Exchange Commission but has not yet become effective. These securities may not be sold nor may offers to buy be accepted prior to the time the registration statement becomes effective. Copies of the shelf prospectus are available on request from the contact listed below or at www.sedar.com and www.sec.gov.

NAP is an established precious metals producer that has been operating its flagship Lac des Iles mine (LDI) located in Ontario, Canada since 1993. LDI is one of only two primary producers of palladium in the world, and is currently undergoing a major expansion to increase production and reduce cash costs per ounce. NAP operates with the vision of becoming a low cost mid-tier precious metals producer, with a target to grow production to over 250,000 ounces of palladium in the next few years. The Company’s shares trade on the NYSE MKT under the symbol PAL and on the TSX under the symbol PDL.