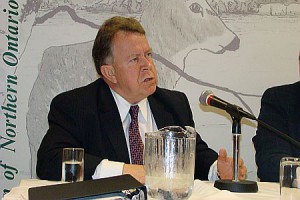 THUNDER BAY – News – “I am thrilled to be asked to take on the responsibility for Northern Development and Mines once again,” states Michael Gravelle the MPP for Thunder Bay Superior North. “We are at a pivotal and exciting time in the North’s history and our Ministry and government will be playing a tremendous role in ensuring opportunities are seized”.

Thunder Bay Atikokan MPP Bill Mauro is the parliamentary assistant to the Minister of Municipal Affairs and Housing.

Minister Gravelle states, “Clearly, mining continues to be a real pillar for Northern Ontario’s economy and certainly development in the far north and the Ring of Fire are top priorities for our government”.

“I am also increasingly excited by the diversification of the economy in the region with knowledge-based sectors playing a significant role, and certainly a focus on transportation infrastructure will continue to be central in building strong and prosperous communities across Northern Ontario”.

Gravelle also addressed his health, “I feel very well and strongly motivated to take on this role again and I look forward to working closely with our many partners.”

The new Premier and Cabinet were sworn in today. “Jobs, the economy and a fair society are the priorities for this new government, and we intend to work with the opposition parties to make progress on these important priorities for the people of this province. There is much that can be done if we set the interests of Ontario at the heart of our work. That is why I am opening a new session of the legislature next week,” stated Premier Wynne, Ontario’s first woman Premier.

Ontario NDP Leader Andrea Horwath states, “On behalf of Ontario New Democrats I want to congratulate Premier Wynne on her swearing in, and the new members of cabinet. The Legislature will be returning in just over a week, and I look forward to getting back to work and delivering some real positive results for the people who elected us. Last week I wrote a letter to Premier Wynne, setting out achievable, affordable goals that will create and protect jobs, strengthen our healthcare system and make life a little more affordable. My team and I are ready to roll up our sleeves and make life better for the people who sent us here.”

The Ontario PCs are less impressed.

“The new premier’s cabinet selections inspire no confidence that the McGuinty-Wynne Liberals will provide the change in direction Ontario needs”, Nipissing MPP and PC Energy Critic Vic Fedeli said today. “If anything,” said Fedeli, “the Premier has been clear that she will only continue the McGuinty agenda that created Ontario’s jobs and debt crisis. “If the Premier believes the path forward is continued overspending and policies that deter job creation and investment, then we’ll head further down the wrong track,” said Fedeli.

“Obviously we cannot support that.”

Fedeli is hoping to persuade the Liberal cabinet not to head down that same path.  To that end, he has written to Northern Development and Mines Minister Michael Gravelle and Natural Resources Minister David Orazietti seeking face-to-face meetings.

“I believe it is important that Minister Gravelle understand the importance of keeping the ONR’s freight division in public hands, and the vital role it could play in the Ring of Fire,” Fedeli said.

Kathleen Wynne
Premier and President of the Council
Minister of Agriculture

Jim Bradley
Minister of the Environment