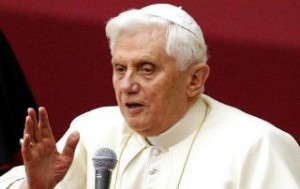 THUNDER BAY – Celebrating Midnight Mass in the Vatican, Pope Benedict XVI shared a message of family, fighting against homelessness, and peace. Addressing the large crowd gathered in a very full St. Peter’s Basilica, Pope Benedict XVI is calling for peace in Syria, Lebanon, Iraq and across the Middle East.

Pope Benedict XVI is also seeking that both the Israelis and Palestinians can live together in peace.

Again and again the beauty of this Gospel touches our hearts: a beauty that is the splendour of truth. Again and again it astonishes us that God makes himself a child so that we may love him, so that we may dare to love him, and as a child trustingly lets himself be taken into our arms. It is as if God were saying: I know that my glory frightens you, and that you are trying to assert yourself in the face of my grandeur. So now I am coming to you as a child, so that you can accept me and love me.

I am also repeatedly struck by the Gospel writer’s almost casual remark that there was no room for them at the inn. Inevitably the question arises, what would happen if Mary and Joseph were to knock at my door. Would there be room for them? And then it occurs to us that Saint John takes up this seemingly chance comment about the lack of room at the inn, which drove the Holy Family into the stable; he explores it more deeply and arrives at the heart of the matter when he writes: “he came to his own home, and his own people received him not” (Jn 1:11). The great moral question of our attitude towards the homeless, towards refugees and migrants, takes on a deeper dimension: do we really have room for God when he seeks to enter under our roof? Do we have time and space for him? Do we not actually turn away God himself? We begin to do so when we have no time for God. The faster we can move, the more efficient our time-saving appliances become, the less time we have. And God? The question of God never seems urgent. Our time is already completely full. But matters go deeper still. Does God actually have a place in our thinking? Our process of thinking is structured in such a way that he simply ought not to exist. Even if he seems to knock at the door of our thinking, he has to be explained away. If thinking is to be taken seriously, it must be structured in such a way that the “God hypothesis” becomes superfluous. There is no room for him. Not even in our feelings and desires is there any room for him. We want ourselves. We want what we can seize hold of, we want happiness that is within our reach, we want our plans and purposes to succeed. We are so “full” of ourselves that there is no room left for God. And that means there is no room for others either, for children, for the poor, for the stranger. By reflecting on that one simple saying about the lack of room at the inn, we have come to see how much we need to listen to Saint Paul’s exhortation: “Be transformed by the renewal of your mind” (Rom 12:2). Paul speaks of renewal, the opening up of our intellect (nous), of the whole way we view the world and ourselves. The conversion that we need must truly reach into the depths of our relationship with reality. Let us ask the Lord that we may become vigilant for his presence, that we may hear how softly yet insistently he knocks at the door of our being and willing. Let us ask that we may make room for him within ourselves, that we may recognize him also in those through whom he speaks to us: children, the suffering, the abandoned, those who are excluded and the poor of this world.

There is another verse from the Christmas story on which I should like to reflect with you – the angels’ hymn of praise, which they sing out following the announcement of the new-born Saviour: “Glory to God in the highest and on earth peace among men with whom he is pleased.” God is glorious. God is pure light, the radiance of truth and love. He is good. He is true goodness, goodness par excellence. The angels surrounding him begin by simply proclaiming the joy of seeing God’s glory. Their song radiates the joy that fills them. In their words, it is as if we were hearing the sounds of heaven. There is no question of attempting to understand the meaning of it all, but simply the overflowing happiness of seeing the pure splendour of God’s truth and love. We want to let this joy reach out and touch us: truth exists, pure goodness exists, pure light exists. God is good, and he is the supreme power above all powers. All this should simply make us joyful tonight, together with the angels and the shepherds.

Linked to God’s glory on high is peace on earth among men. Where God is not glorified, where he is forgotten or even denied, there is no peace either. Nowadays, though, widespread currents of thought assert the exact opposite: they say that religions, especially monotheism, are the cause of the violence and the wars in the world. If there is to be peace, humanity must first be liberated from them. Monotheism, belief in one God, is said to be arrogance, a cause of intolerance, because by its nature, with its claim to possess the sole truth, it seeks to impose itself on everyone. Now it is true that in the course of history, monotheism has served as a pretext for intolerance and violence. It is true that religion can become corrupted and hence opposed to its deepest essence, when people think they have to take God’s cause into their own hands, making God into their private property. We must be on the lookout for these distortions of the sacred. While there is no denying a certain misuse of religion in history, yet it is not true that denial of God would lead to peace. If God’s light is extinguished, man’s divine dignity is also extinguished. Then the human creature would cease to be God’s image, to which we must pay honour in every person, in the weak, in the stranger, in the poor. Then we would no longer all be brothers and sisters, children of the one Father, who belong to one another on account of that one Father. The kind of arrogant violence that then arises, the way man then despises and tramples upon man: we saw this in all its cruelty in the last century. Only if God’s light shines over man and within him, only if every single person is desired, known and loved by God is his dignity inviolable, however wretched his situation may be. On this Holy Night, God himself became man; as Isaiah prophesied, the child born here is “Emmanuel”, God with us (Is 7:14). And down the centuries, while there has been misuse of religion, it is also true that forces of reconciliation and goodness have constantly sprung up from faith in the God who became man. Into the darkness of sin and violence, this faith has shone a bright ray of peace and goodness, which continues to shine.

So Christ is our peace, and he proclaimed peace to those far away and to those near at hand (cf. Eph 2:14, 17). How could we now do other than pray to him: Yes, Lord, proclaim peace today to us too, whether we are far away or near at hand. Grant also to us today that swords may be turned into ploughshares (Is 2:4), that instead of weapons for warfare, practical aid may be given to the suffering. Enlighten those who think they have to practise violence in your name, so that they may see the senselessness of violence and learn to recognize your true face. Help us to become people “with whom you are pleased” – people according to your image and thus people of peace.

Once the angels departed, the shepherds said to one another: Let us go over to Bethlehem and see this thing that has happened for us (cf. Lk 2:15). The shepherds went with haste to Bethlehem, the Evangelist tells us (cf. 2:16). A holy curiosity impelled them to see this child in a manger, who the angel had said was the Saviour, Christ the Lord. The great joy of which the angel spoke had touched their hearts and given them wings.

Let us go over to Bethlehem, says the Church’s liturgy to us today. Trans-eamus is what the Latin Bible says: let us go “across”, daring to step beyond, to make the “transition” by which we step outside our habits of thought and habits of life, across the purely material world into the real one, across to the God who in his turn has come across to us. Let us ask the Lord to grant that we may overcome our limits, our world, to help us to encounter him, especially at the moment when he places himself into our hands and into our heart in the Holy Eucharist.

Let us go over to Bethlehem: as we say these words to one another, along with the shepherds, we should not only think of the great “crossing over” to the living God, but also of the actual town of Bethlehem and all those places where the Lord lived, ministered and suffered. Let us pray at this time for the people who live and suffer there today. Let us pray that there may be peace in that land. Let us pray that Israelis and Palestinians may be able to live their lives in the peace of the one God and in freedom. Let us also pray for the countries of the region, for Lebanon, Syria, Iraq and their neighbours: that there may be peace there, that Christians in those lands where our faith was born may be able to continue living there, that Christians and Muslims may build up their countries side by side in God’s peace.

The shepherds made haste. Holy curiosity and holy joy impelled them. In our case, it is probably not very often that we make haste for the things of God. God does not feature among the things that require haste. The things of God can wait, we think and we say. And yet he is the most important thing, ultimately the one truly important thing. Why should we not also be moved by curiosity to see more closely and to know what God has said to us? At this hour, let us ask him to touch our hearts with the holy curiosity and the holy joy of the shepherds, and thus let us go over joyfully to Bethlehem, to the Lord who today once more comes to meet us. Amen.

The Story of How Bill McRea Became a Hope for Thousands