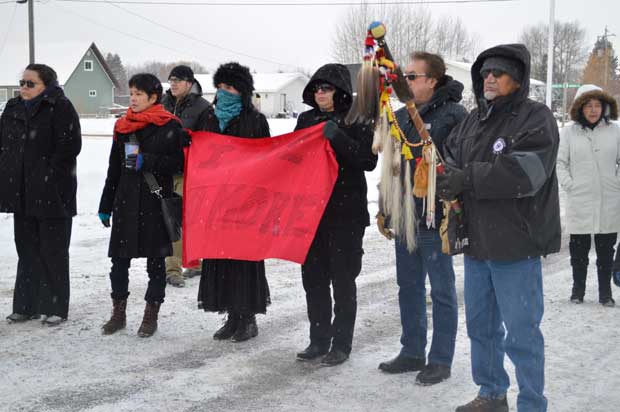 THUNDER BAY – “The sacred fires have been lit”. That message was shared this morning at a rally at Fort William First Nation in front of the INAC offices.  The lead speaker was Erin Bottle.

Idle No More rallied this morning to share the word that recent moves from the federal government are unacceptable to First Nations representatives.

The morning chill was in the air, and the group gathered starting at 10AM to share a vision where First Nations people stand up against what are being seen as direct threats to their future. A circle was formed by the fifty or sixty people who came out to support the effort. Speakers shared their thoughts and potential courses of action.

“Letters have been written, walks are done, it is time to talk”, commented Bottle.

The depth of passion and concern over what is happening, and what needs to be done was strong in the air.

Last week, in Ottawa, one of the resolutions passed by Chiefs at the Assembly of First Nations explains “First Nations are the children of Mother Earth. This relationship and our spiritual obligations to the land and waters are essential to our responsibilities as First Nations peoples and serves as the foundation of  our identity”.

Protecting traditional lands, and protecting the heritage and culture of Aboriginal people is seen as under a full attack by the federal government, and that has formed the Idle No More effort that seeks to boost the critical mass of First Nations people to ‘wake up the sleeping giant’ and take greater action to protect Aboriginal rights.

From the Nishnawbe-Aski Nation, NAN Deputy Grand Chief Les Louttit read the motion agreed to in Ottawa by leaders.

“We, the original peoples of Turtle Island hereby assert our sovereignty as Nations, entrusted to us by the Creator, As First Nations peoples, we are guided by principles of peace, harmony and respect; we are also bestowed with the responsibility by the Creator to defend our territories, including traditional and Treaty lands, We have maintained these principles despite the imposition of illegal government legislation and policies against our citizens, In solidarity, we categorically reject the assimilation and termination policies used by the government of Canada against our nations and our citizens and, We support the participation of all First Nations peoples in decision-making processes that impact our inherent and treaty rights, We unconditionally reject any Canadian or provincial legislation, policies, or processes that impact our lands, air, waters and resources which have not obtained our free, prior, and informed consent;

“In order to ensure economic stability and protection of our environment, development projects or any other initiatives that may impact our Nations requires our full and inclusive participation and our free, prior and informed consent, To protect the integrity of our treaty and inherent rights, we hereby put the Government of Canada on notice that any further imposition of legislation and/or policies will be met with appropriate measures;

“We formally call upon our citizens – our men, youth, women, elders, warriors and all other allies – to unify and support one another during this time of attacks on our governments and nations. The First Nation Chiefs in Assembly, from this day forward, declare unity and resolve to forcefully defend our lands, territories, peoples and jurisdiction”.