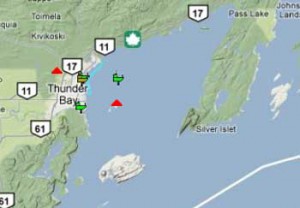 THUNDER BAY – Viewpoint – The new report by the Conference Board of Canada titled Northern Assets: Transportation Infrastructure in Remote Communities on transportation in northern Canada provides a case study of Churchill Manitoba as a potential international gateway that may give the Port of Thunder Bay some cause for concern. The Port of Churchill and its Bay Line rail line play a key role in what is referred to as the Government of Manitoba’s Churchill Gateway System. Churchill could increase its role as a shipping hub by diversifying the range of agricultural products it handles and by increasing its share of Nunavut-bound freight—especially for mining projects. As well, climate change and melting sea ice is opening up the possibility of developing polar shipping lanes between Churchill, Asia, and Europe.

Churchill’s main competitor for Asian and European markets is the Canadian east-west rail-marine transport network and in particular, the Port of Thunder Bay. Table 4 of the Conference Board report shows how Churchill is closer to many European ports than Thunder Bay. The year-round shipping opportunities afforded by global warming apparently makes Churchill an even more attractive shipping venue. 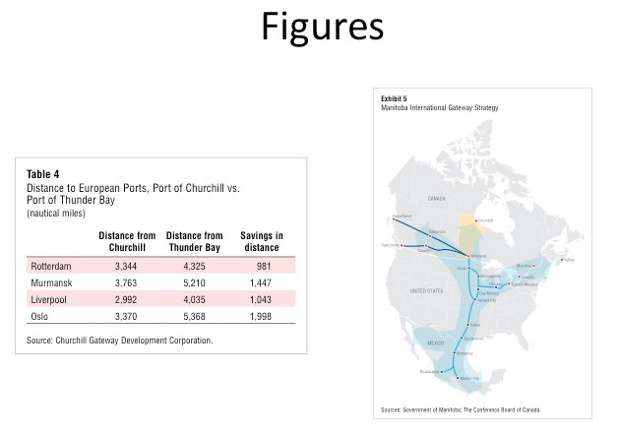 Developing Churchill’s role as a shipping hub in Northern Canada will require substantial investment in transportation infrastructure in and around the community, consolidated effort from public and private stakeholders, and an informed analysis of such a transportation network. A key proponent is the province of Manitoba which has a transport strategy known as Centreport with Winnipeg as a key hub. According to the Conference Board Report:

The overarching aim of the strategy is to “advance Manitoba’s position as a sustainable transportation and distribution gateway of choice for North American mid- continent global commerce and international travel.” The development and growth of the Port of Churchill is a key element of this strategy.

While initial versions of the Centreport Strategy placed Thunder Bay on the eastern arm of the transport network, recent reformulations appear designed to bypass the Port of Thunder Bay entirely. As the accompanying map from the Conference Board report shows, the planned Manitoba International Gateway Strategy now bypasses Thunder Bay completely with the eastern arm being a land route going through Minneapolis and Chicago and then through southern Ontario. The Canadian ports in this strategy are saltwater ports – Prince Rupert, Vancouver, Churchill with the St. Lawrence-Seaway Ports being Detroit-Windsor, Toronto, and Montreal.

Alarm bells should be ringing in Thunder Bay given that this new strategy is not just a Manitoba government lobbying strategy but now also seems to have been given the blessing of the Conference Board of Canada. What’s next? A call for Federal government funding to build a rail link from Churchill to the Ring of Fire?