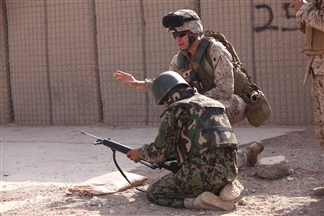 WASHINGTON – An attack near the U.S. Embassy and International Security Assistance Force headquarters in the Afghan capital of Kabul today will not deter the United States from its efforts in Afghanistan, Pentagon Press Secretary George Little said here. “The insurgents will not prevail,” stated Little “Our resolve is unwavering.”

A small group of insurgents attacked near the U.S. Embassy and ISAF headquarters at around 1:30 p.m. local time (5 a.m. EDT), firing from outside the compound

using small arms and rocket-propelled grenades, officials said. Afghan and coalition forces immediately responded to the attack, and still are on the scene. Coalition forces are providing air support.

Meanwhile, CIA Director David H. Petraeus offered an update on the attack earlier today in testimony before a joint hearing of the House and Senate intelligence committees. “I talked to Ambassador [Ryan C.] Crocker a couple of hours ago. … He reported that all embassy members are accounted for, [and] there have been no injuries to any embassy members,” he said. Four Afghan citizens were injured – “three of those very lightly” — when a rocket-propelled grenade hit an old chancery building, he said, adding that one girl needed to go to the hospital in the ISAF compound.

‘Now, we are back to zero’: Afghan businesswomen on the run