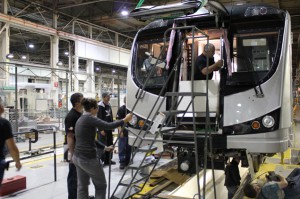 THUNDER BAY – Workers at Thunder Bay’s Bombardier plant are working on contracts for the Toronto Transit Commission. Almost a billion dollars worth of orders have been placed and are part of what is keeping the plant busy. Bombardier however is a massive global company. The Thunder Bay facility is just a part of the company’s manufacturing and assembly facilities.

It may be Labour Day in Canada, but Bombardier Transportation has announced that it has received an order for 76 additional Bombardier MOVIA metro cars from the Delhi Metro Rail Corporation Ltd (DMRC) in India. The contract is valued at approximately 84 million euro ($120 million US) and is a follow-on to the orders for 114 vehicles announced in mid 2010. Delivery will commence in the third quarter of 2012 and is expected to end in early 2013.

With the new order DMRC will be operating a fleet of 614 MOVIA metro cars, one of the largest in the world. DMRC will be benefiting from economies of scale in both acquisition and maintenance costs. Around 460 of these MOVIA cars are already operating successfully on Delhi’s metro network. With more high-capacity MOVIA metro trains in operation, mobility in Delhi is improving on a weekly basis, with passengers getting their travel experience enhanced by less waiting time and more space inside the trains. During the 2010 Commonwealth Games in Delhi the MOVIA metro trains were a cornerstone of the mobility plan successfully implemented by DMRC.

Stephane Rambaud-Measson, President, Passengers division, Bombardier Transportation, said: “We are delighted to receive this additional order to supply MOVIA vehicles in New Delhi. It is an excellent endorsement of our growing relationship in India. We intend to continue to contribute to the success of the Delhi Metro network by delivering more of our high performance MOVIA vehicles, meriting the trust that the DMRC management have placed in us.”

The MOVIA vehicles and Bombardier FLEXX Metro 3000 bogies are manufactured entirely at Bombardier’s industrial site in Savli, Vadodara which is in Gujarat State, India. The site inaugurated in 2008 has proven to be a real impetus to the local economy. To date, 780 new direct positions and over 3,000 indirect jobs through the local supplier network have been generated. The proven design of the FLEXX Metro 3000 bogies is geared towards the operational requirements of DMRC to ensure safe, reliable operations and low life cycle costs.

Benoit Cattin Martel, President & Managing Director, Bombardier Transportation in India, said: “India’s railway industry is expanding at great speed to keep up with the infrastructural requirements of the country. Having anticipated this growth, Bombardier in India is more than ready and willing to match the industry’s needs in terms of products, technology and our international expertise.” He added: “Making Vadodara the only city in the world equipped to deliver all key electrical and mechanical components for the manufacturing of a railway vehicle is a clear demonstration of Bombardier’s local capacity and commitment.”

The success of the MOVIA car is acknowledged by the majority of operators around the world. This is evident with more than 3,900 MOVIA metro cars ordered to date. Bombardier’s expertise is proven as one of the world’s major suppliers of metro cars transporting over 7 billion people every year using its metro cars in cities like New York, Montreal, Toronto, Paris, London, Berlin, Bucharest, Stockholm, Shanghai, Shenzhen, Guangzhou, New Delhi and many others.

The MOVIA metro vehicles integrate the world’s most advanced technologies in metro vehicle manufacturing, such as stainless steel carbodies and the reliable Bombardier MITRAC propulsion and control system featuring IP technology. The MOVIA metros are developed from a standardised platform, which ensures a high degree of reliability, safety and maintainability while providing low life-cycle cost. Original, stylish and fully accessible, the MOVIA metro offers values and services that are second to none.