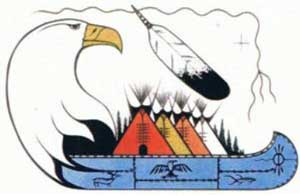 LONGLAC, ONTARIO – For many First Nations across Ontario, it is election time. Ginoogaming First Nation near Longlac, Ontario held their Chief and Council elections last week as community members gathered in the community hall to cheer on their leaders and witness the results. As the votes were being counted it became evident that Celia Echum would secure a third term as Chief with a considerable win defeating rival Sharon Mendowegan with a vote count of 127 to 60.

Chief Echum says she is “really thankful’’ to the community for their overwhelming support. Her priority as Chief is to work towards continued economic development.

Her vision is to create a vibrant, self-reliant First Nation as she plans to reopen the wafer-board facility and parts of a plywood facility in Longlac. Both have been shut down since 2008, and the restarts would create 330 direct jobs.

She is also looking to place continued emphasis in increasing the recent post-secondary success enjoyed among the community of more than 773 members. “If you are going to have a prosperous community, you have to have an educated community,’’ said Celia.

To the Office of Chief:
ECHUM, Celina (Celia)

Celia, the mother of five sons and many grandchildren becomes the first Ginoogaming Chief to be re-elected for three straight terms since her husband Gabriel Echum when he led the First Nation from 1993-1999. Prior to being elected as Chief in 2007, Celia was served as a band councillor from 2005-2007 and worked in band administration for over 25 years.

Highlights from the Thunder Bay Police Services Board Meeting: January 18, 2022