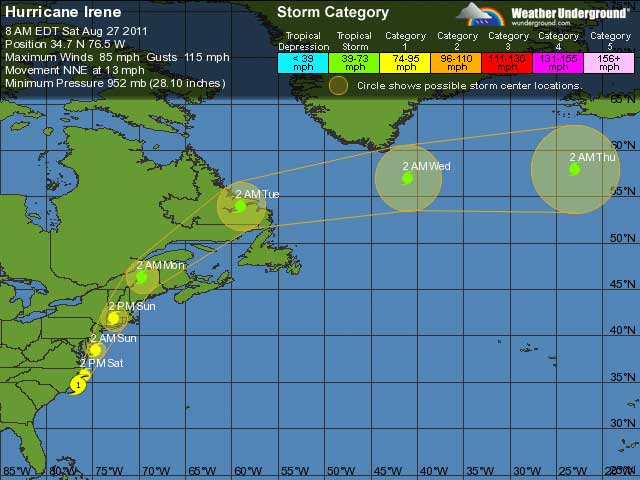 THUNDER BAY – Hurricane Irene made landfall this morning. The center of Irene made landfall near Cape Lookout North Carolina. Satellite imagery and coastal radar data show that Irene has lost some organization this morning. The cloud tops have warmed significantly in the western semicircle, and there is a lack of convective banding in the southwestern quadrant in the radar data.

This suggests that dry air seen in water vapor imagery to the west of Irene is starting to entrain into the hurricane. An Air Force Reserve hurricane hunter aircraft continues to observe 90-100 kt winds at 700 mb over the eastern semicircle. However, the highest surface wind estimates from the SFMR have only been 70-75 kt.
The initial intensity is reduced to 80 kt…and this could be a little generous. Despite the decrease in convective organization…the aircraft reports that the central pressure remains near 952 mb.

Near the coast the surge will be accompanied by large destructive and life-threatening waves. Storm surge values are very location-specific…and users are urged to consult products issued by their local National Weather Service offices.

The initial motion is 020/12. Irene is west of the subtropical ridge, with water vapor imagery showing a mid/upper-level shortwave trough in the westerlies moving across the Great Lakes.

Irene should continue to move north-northeastward into the westerlies during the next 36-48 hours, with the center moving over eastern North Carolina, over or near the coast of the mid-Atlantic states, and then over New England. After 48 hours, the cyclone should turn northeastward and then east-northeastward with an increase in forward speed as it reaches the core of the westerlies.

The new forecast track is an update of the previous track and lies in the center of the guidance envelope.

Land interaction…dry air entrainment…and increasing vertical wind shear should cause Irene to weaken as it moves along the U.S. East Coast. However, the cyclone is expected to remain a hurricane with a very large wind field until after landfall in New England. Extratropical transition should occur after the New England landfall, with Irene gradually weakening from 48-120 hr.

The radar presentation of the center of Irene has decreased to the point that we will be reverting to three-hourly intermediate advisories.