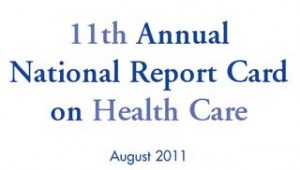 THUNDER BAY – What do you think of Canada’s healthcare system? According to the Canadian Medical Association, “Canadians want a health care system that empowers patients and provides them with greater accountability in their care through measures such as a patient health charter, a patient complaint and redress mechanism, such as allowing those who are not receiving adequate or timely care in their own jurisdiction to receive publicly insured care in another jurisdiction”.

“Patients are too often lost in the shuffle in health care,” said Canadian Medical Association President Dr. Jeff Turnbull. “Canadians want their territorial, provincial and federal governments to get together and create a system that revolves around the patient, rather than the other way around, and they favour practical steps that can move us forward in that direction.”

The CMA has released its eleventh annual National Report Card on Health Care in Canada. The research focuses on access to health care services and shows clear support for specific measures to make the system more accountable to patients.

“We’ve been hearing for months now that Canadians expect their governments to take action on health care,” Turnbull said. “The public clearly understands that our health care system isn’t going to improve without political leadership at both the federal and provincial/territorial levels.”

In addition to important information on how Canadians view measures to empower patients, the eleventh annual CMA Report Card also shows that public opinion about the health care system slipped when compared to last year. In 2011, only seven in 10 (70%) of Canadians asked gave the system an A or a B for overall quality of the health care services available. Last year three-quarters (75%) of those asked graded the system with either an A or B.

The 2011 Report Card showed a similar decline in Canadians’ perceptions of the actions of the federal government in dealing with health care, with 36% assigning either an A or B grade to its performance (41% in 2010). This year, 38% of Canadians graded the performance of their provincial government with either an A or B grade, down only slightly from 2010 (41%). The fading grades for both the provincial and federal levels of government indicate a general decline in positive views among Canadians toward health care services available to them and their families. The vast majority (83%) say that health services have either stayed the same (47%) or gotten worse (36%) since the last federal-provincial health accord was signed in 2004.

The Report Card can be accessed at: www.cma.ca/2011reportcard