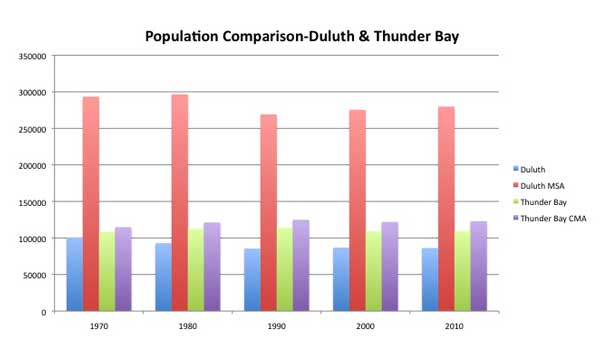 THUNDER BAY – Thunder Bay residents flock to visit and shop in Duluth, Minnesota and continually remark how robust and vibrant Duluth’s waterfront and downtown area is when compared to Thunder Bay. This appears to be all the more surprising given that the population of the city of Thunder Bay – at about 110,000 people – is much larger than the city of Duluth, which stands at about 86,000. One can point to the fact that much of Duluth’s visitation and tourism actually comes from nearby Minneapolis-St. Paul (a two hour drive) which has a population of nearly three and a half million people as well as from Wisconsin.

However, this is only a partial explanation given that downtown and waterfront areas are not only a tourism attraction but are also a focus for your own community’s activity. The fact is, Duluth is a much larger community than Thunder Bay when the population of the surrounding St. Louis, Carlton and Douglas counties – the Duluth metropolitan statistical area – is considered.

There are nearly 280,000 people living in immediate the Duluth area as compared to about 125,000 in the immediate Thunder Bay vicinity or census metropolitan area. Basically, the Duluth area has 2.2 times the population of the Thunder Bay area and as a result can support a much denser downtown core and waterfront area even without visitors from Minneapolis-St. Paul (and Thunder Bay).