Home News Editorial Is Living in the North Bad for Your Health?

THUNDER BAY – Special to NNL – Statistics Canada provides a lot of valuable data and it is interesting from time to time to gather some data and make some comparisons between where we live here in Northern Ontario and the province as a whole.  I collected the data on the age-standardized death rates for the Thunder Bay District Health Unit region and for Ontario from the community Health Profiles site and the results show that generally speaking, death rates in the region are higher than Ontario for most diseases. 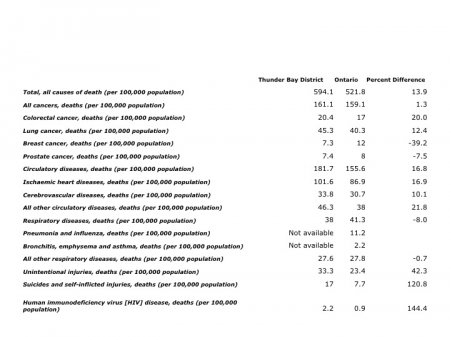 In any event, the reasons for the higher death rates in the region are complex.  Nevertheless, death rates are higher and one needs to ask if all factors for this difference have been accounted for and if everything possible is being done to address this situation? Is a higher death rate simply an attribute of living in the North along with climate and the wildlife? Is it a function of the resources being spent on our regional health care system, in particular the shortage of specialists?  Is it a lifestyle choice given the tendency towards more smoking, drinking and overeating in the region? Is there something we can learn in how breast and prostate cancer is being handled in the region given the lower death rates there that can be applied to other conditions? How to reduce the death rate to reflect the rest of the province?  Interesting questions for which I do not have answers.