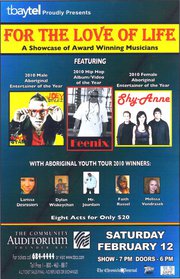 THUNDER BAY – If you are in the mood for a night of great music then reserve February 12th on your events schedule.

Featuring a long list of top entertainers, and some of the up and coming future stars of the region’s music scene, this event promises to be a night of fun for both young and old(er)!

The musical talents of Joey Stylez, Shy-Anne Hovorka and Feenix will “headline” this show, but “For the Love of Life!” is more than just a concert, it is a way for these stars to offer a venue for youth and build the message that if you try, you can do anything!

The depth of musical talent in our region and across all of the western part of Ontario is proving itself time after time to be well worth supporting.

“It is all about the youth,” shares Shy-Anne, who is an amazing supporter of youth in our community.

And if that were not enough, there is a group of up and coming artists who will take the stage too. The list includes;

Plus Special Appearances by:

The event is “The Love of Life!” and Tickets are going fast. The front row is already sold out.

For only $20.00 this is likely one of the entertainment deals of the year for Thunder Bay and region. Tickets on sale now at the Thunder Bay Community Auditorium Box Office, or online at: http://www.tbca.com/article/-655.asp