THUNDER BAY – The Canadian Aboriginal Music Awards have released the nominees for the 2010 awards. The Thunder Mountain Singers and Shy-Anne Hovorka are nominated, and hopefully will build in their recent success at the Aboriginal People’s Choice Awards. 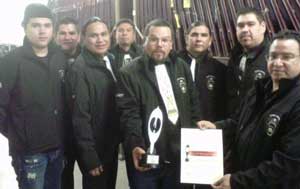 Shy-Anne is nominated in the Best Music Video category for “Can’t Change the World”. Shy-Anne’s music is a powerful combination of lyrics and instrumentals. The biggest dream for Shy-Anne is that her music will help others understand life, and realize they are not alone. Especially the children that are in foster care. She also wants Educators, Parents, Foster Parents, Children’s Aid and care-givers know how much they can impact one life, and how that one life can in turn hopefully impact many others in a positive way thanks to their love and determination.

In her music video Can’t Change the World, Shy-Anne offers a vision of how by coming together that we can make a difference in the world, and how important that coming together is.

The talent in Northwestern Ontario in music, in music video production, and video is one of the region’s hidden gems.

While there is some support for this growing, and important economic generator, much of the money for film and video goes to Sudbury.

The Minister responsible for the Northern Ontario Heritage Fund, Michael Gravelle, the MPP for Thunder Bay Superior North, has not yet been able to bring home the funds. Sudbury continues to gather in the majority of the money.

Gravelle acknowledges that putting funding into film and video is an important part of economic diversification.

Commenting on a recent $250,000 grant for a project, Gravelle stated, “This investment demonstrates our government’s commitment to diversifying the northern economy and helping provide employment opportunities in the North.”

However right now, it appears that no new money will be forthcoming. According to the NOHFC Website, “The NOHFC is currently reviewing part of its Emerging Technology Program as it relates to funding film and television production projects. Applications will continue to be accepted but will be held in abeyance until the review is completed”.