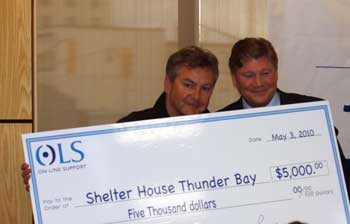 THUNDER BAY – On-Line Support (OLS) announced today that they will expand their inbound contact center operations to Thunder Bay during the summer of 2010. The new site will create several hundred jobs, which includes both entry level and management positions.

“The City of Thunder Bay is pleased to have been selected as the successful site for OLS’s expansion,” said Mayor Lynn Peterson. “An initial creation of over 200 jobs, and the potential for up to 400 within the year, is a big win.”

The groundwork for the expansion to Thunder Bay began back in March when OLS held a career fair to gauge the interest of the local community. “The response of people in the area was overwhelming,” said Ross Beattie, President & CEO – On-Line Support. “We were also very impressed with the quality of the people who showed interest in a career with OLS. This was one of the main factors in our decision to come here.”

Expansion is nothing new for OLS, who opened a site in Timmins, ON a year ago and a few more sites in Pembroke, ON & Antigonish, NS over the past three years. In total, OLS now operates nine contact centers, located in Ontario, Nova Scotia and PEI.

“The Thunder Bay Community Economic Development Commission (CEDC) is very excited to welcome OLS, one of Canada’s premier customer contact centres, to our community along with the creation of several hundred jobs,” said Steve Demmings, CEO – CEDC. “This is a big investment and we express our gratitude for investing in Thunder Bay.”

While the site will officially opens in June, hiring is expected to begin immediately. For more information on positions or to apply to OLS, visit www.JoinOLS.com.

As a demonstration of OLS’s commitment to their new community, the company made a surprise $5,000 donation to Thunder Bay’s Shelter House.  “OLS recognizes that our operations and the people we employ are a part of the community,” said Ross Beattie. “As a corporation we think it is important to support the community both as an employer and as a community partner.”