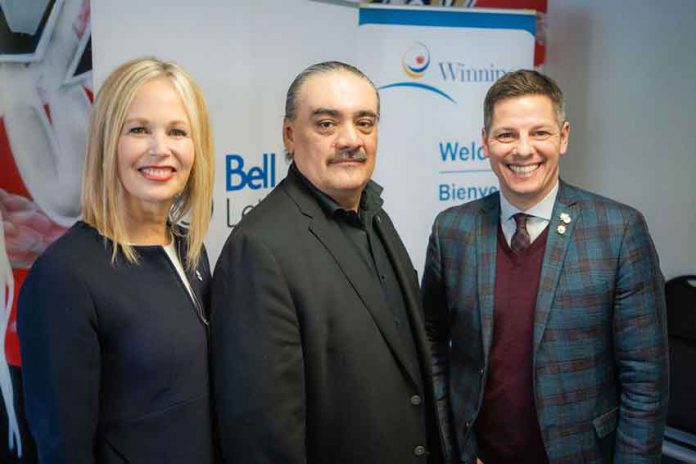 WINNIPEG – NEWS – The Bear Clan Patrol in Winnipeg has received some serious funding which will assist the growing organization in helping people in Winnipeg.

Bell Let’s Talk and the City of Winnipeg today announced a combined donation of $200,000 to Bear Clan Patrol, the community-based organization providing safety and belonging, mental wellness support, conflict resolution and crime prevention for vulnerable people in the community.

“Over the last four years, The Winnipeg Bear Clan Patrol has provided community-based solutions that offer a sense of safety and kinship to both our members and the people we serve,” said James Favel, Executive Director of Bear Clan Patrol Inc. “It’s amazing what a group of people with a purpose can accomplish and our volunteers and staff are deeply gratified by this kind of support from Bell Let’s Talk and the City of Winnipeg.”

NetNewsLedger got the opportunity to interview James Flavel of the Bear Clan Patrol in Winnipeg.

“Bell Let’s Talk is proud to join with the City of Winnipeg to help Bear Clan Patrol in its work to provide a safe and supportive environment for members of the community struggling with mental health challenges,” said Mary Deacon, Chair of Bell Let’s Talk. “Bear Clan Patrol is having a positive impact on the lives of the most vulnerable in Winnipeg and we are pleased to support the impressive work they are doing.”

“I am happy to be able to support the Bear Clan Patrol which has had a tremendously positive impact in our community,” said Mayor Brian Bowman. “Their work continues to be a source of pride and inspiration while providing a volunteer-based community service. It is wonderful to see Bell Let’s Talk putting significant dollars toward the Bear Clan and I commend them on their support.”

Bell Let’s Talk’s donation of $150,000 and the City of Winnipeg’s $50,000 donation will allow Bear Clan Patrol volunteers and staff to increase engagement to as many as 1,450 people per week from the current capacity of 450. Additional funding will also grow the food distribution program capacity from 250 people per week to 750, and also support a new resource and weekly counselling program for 25 people.

Bell Let’s Talk in Manitoba
With the launch of Bell MTS in Manitoba in 2017, Bell Let’s Talk announced it would further expand in the province with the launch of a dedicated fund for Indigenous mental health. Today’s announcement is the third major commitment from the fund, following donations in May 2017 to Ma Mawi Wi Chi Itata and in January 2018 to Ogijiita Pimatiswin Kinamatwin. The Bell Let’s Talk team continues to consult with leaders from Manitoba Indigenous communities on plans for future program funding.

Bell will donate 5 cents to Canadian mental health programs for each of the following interactions on Bell Let’s Talk Day, at no extra cost to participants beyond what they would normally pay their service provider for online or phone access:

Total Bell Let’s Talk Day interactions since the first event in 2011 stand at 867,449,649 and are expected to exceed 1 billion on January 30. Bell’s funding commitment for mental health, including the company’s donations based on Bell Let’s Talk engagement and its original $50-million donation to launch the initiative, is now $93,423,628.80 and expected to surpass $100 million on January 30.

About Bell Let’s Talk
The Bell Let’s Talk mental health initiative is focused on 4 key action pillars: Anti-stigma, Care and Access, Research and Workplace Leadership. Since its launch in September 2010, Bell Let’s Talk has partnered with more than 900 organizations providing mental health services throughout Canada, including major donations to hospitals, universities and other care and research organizations. To learn more, please visit Bell.ca/LetsTalk.