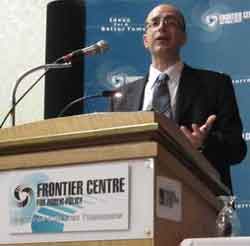 THUNDER BAY – OPINION – Government deficit and debt numbers in Canada are rising due to accounting changes made to better reflect the true nature of government liabilities.

Ontario recently revised its deficit and debt projections (based on advice from its auditor general) to better reflect the true costs of pension liabilities and its electricity programs.

And because of the recommendations of the federal auditor general, Ottawa is changing how it treats future pension obligations for civil servants. This is expected to add $20.1 billion to the federal debt for 2017-18 and raises future debt and deficit estimates.

Why is this important?

Knowing the true size of government liabilities is central to fiscal responsibility. But even more important is taking the steps towards true sustainable finances by reducing deficits.

We’re now 10 years out from the 2008-09 financial crisis and Great Recession that sparked a massive accumulation of public debt worldwide. While Canada fared better than most, we nonetheless reversed the fiscal progress made after the federal debt crisis of the early 1990s.

The period after the mid-1990s saw 11 consecutive federal surpluses, a declining debt-to-gross-domestic-product ratio (an indication of a country’s ability to pay its debts) and a fall in nominal federal debt.

When will the next recession begin, given that the current expansion is rather long in the tooth?

The recovery from the 2008-09 recession is incomplete given that fiscal stimulus and easy money spawned an even larger global government debt pile with the potential for another sovereign debt crisis as interest rates rise. Even with the economic recovery that grew stronger after 2015, many countries won’t enter the next recession in a stronger fiscal state than before 2008.

Of the G7 countries, only Germany has seen a reduction in its gross government debt ratio, going from 65 percent to 60 percent.

In Canada, we pride ourselves on a relatively low federal debt-to-GDP ratio of just over 30 percent. But add the provinces and their municipal creatures into the mix and from 2008 to 2018, our general government gross debt rose from 69 percent to 87 percent.

As for China, whose economy has served as a major global engine, its gross general government debt-to-GDP ratio grew from 27 percent to 48 percent. And this may be an underestimate as some analysts suggest it’s well over 60 percent due to local government debts.

We’re already on the road toward the next economic downturn given that periods of prolonged interest rate hikes have often been precursors to downturns and the U.S. Federal Reserve has raised its benchmark rate eight times since 2015.

The next global downturn will feature the interaction between high public debt, rising interest rates and a trade/tariff war-enhanced economic slowdown. In addition, given growing international rancour, policy co-ordination and co-operation may be more difficult to implement.

Clearly, as a result of their inability to reduce debt and deficits, governments around the world will go into the next recession with fewer economic management tools at their disposal.

Fiscal policy will be more limited given the already large debts and deficits.

Monetary policy will also be limited given that while interest rates are rising, they are still probably not high enough to allow for a substantial stimulatory reduction.

However, they are high enough to slow the economy and raise debt-service costs and further restrain government fiscal action given, again, the large piles of public debt.

Livio Di Matteo is a senior fellow at the Fraser Institute.