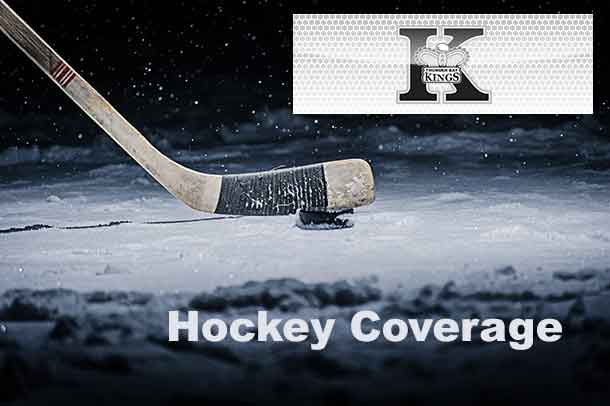 THUNDER BAY, Ont. – The Notre Dame Hounds built up a three-goal lead then had to withstand a furious third comeback attempt by the Winnipeg Wild before eventually prevailing with a 4-3 triumph in Day 2 play at the TELUS Cup West Regional, presented by Windsor Plywood, at Fort William First Nation Arena in Thunder Bay.

Notre Dame opened the scoring two minutes into the contest as Drew Englot redirected a Wolford Coalson shot from inside the blueline that beat Winnipeg starter, Miles Minor.

Coalson picked up his second assist of the session a few shifts later as he once again set-up Englot who was driving to the front of the net and chipped the puck over Minor at 5:09 to give the Saskatchewan side a two-tally cushion after one period of play.

The Hounds added to their margin early in the middle session as Brad Morrisey came down the left wing and let loose a shot that eluded Wild goaltender to put them up by three with the lone marker of the frame.

Moving on to the third Winnipeg would eventually solve Notre Dame netminder Riley Kohonick as a hard-charging Jackson Klewchuk stuffed the puck in from the right of the crease at 5:12.

Going to the power play later in the period, the Wild pulled to within one as Kaden Bryant converted the man advantage as his quick shot from the slot found its way through a crowd in front.

Continuing to press the pace, the Manitoba Midget Hockey League champions would draw level at 14:47 on a mini two-on-one that saw Mikol Sartor saucer a pass over to an open Kyle Bettens who calmly waited out a diving Kohonick and proceeded to wire the equalizer into the top of the net.

However, the Hounds would regroup and come back with the eventual game-winner a minute and a half later with Cole Stevenson jamming in the difference maker following a crowded goal-mouth scramble.

Winnipeg pulled their goalkeeper in the late going to try and tie it once more, however, the Hounds defence stiffened to hold on for the win.

The Wild fired 19 shots on net in the third period with the contest finishing up with 31 attempts apiece for the afternoon.

Notre Dame’s Coulson and Winnipeg’s Zach Falck both had two assists for their respective sides.

With the result, Notre Dame improves to 2-0 at the four-team event while Winnipeg slips to 1-1.

Awaiting the 2018 West Regional winner will be a berth to the TELUS Cup Canadian National Midget event, April 23-29, in Sudbury, Ont. 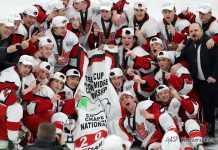 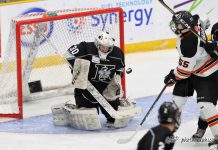 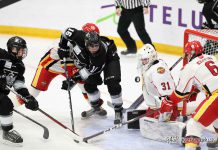 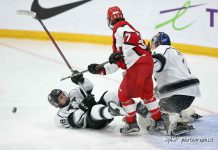 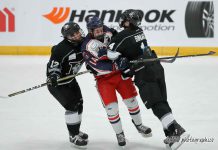 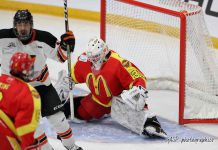