THUNDER BAY – LIVING – Have you ever truly considered the merits of black pepper? If not, no one would blame you. This staple seasoning is so commonplace it’s barely an afterthought for most people while cooking or eating. True, peppercorns — the fruits from flowering vines that inspired the ancient spice trade have been around forever. Given this over familiarity, black pepper may be the single most misused and misunderstood ingredient in the kitchen today.

I’ve long been blasé about pepper. Using finely ground black pepper growing stale in a shaker is unthinkable for any professional cook. But even Tellicherry peppercorns, a prized variety of this fruit cultivated on India’s Malabar Coast, ground from my peppermill gets me persnickety. I generally find myself resisting the ever-present cookbook instruction to “season with salt and pepper.” Some recipes assert “freshly ground black pepper,” but it’s all the same to me.

Used so automatically, black pepper, I’ve believed, is sticking its (sharp, biting) nose where it does not belong. When it comes to seasoning meat, and nearly everything I cook, I stick to salt, adding pepper only when and if its musty pungency will complement the dish.

I found a like-minded soul when Sara Dickerman in Slate denounced black pepper’s place in the seasoning pantheon with salt, as if our prized salt was stuck on a perpetually bad date. Her point, for which she was denounced by pro-pepper enthusiasts, was this: Black pepper has wrongfully earned its place at the table.

This winter, as I produced quarts of beef and chicken broth and mugs of homemade chai, I found myself radically rethinking this spice. I’d palm four or five puckered peppercorn orbs and roll them into the steaming liquids where they’d imbue their warming, spiced, woodsy aromas. In the building of flavors, black pepper is foundational, essential. I would seriously miss it.

That’s when I realized that I’d been ignoring a medieval spice merchant’s riches of peppercorns in my spice basket. Purchased six months before at The Spice & Tea Exchange in downtown Portland, Ore., along with Ceylon cinnamon sticks, saffron and Hungarian paprika, were five wildly different types of peppercorns. If these had been samples of sea salts or olive oils, I would have tasted them on the spot. But it took a giant pot of beef stock simmering on the stove to get me to study each specimen.

Most surprising were the long pepper shaped like a tiny pine cone and the African kili pepper resembling a twig and filled with bitter seeds. I compared the black and white ponape peppercorns both from the Pohnpei plant, the difference being the black is picked green and matured before sun drying while the white is picked red ripened, then fermented and skinned before sun drying. The intriguing, purple-black Tasmanian pepper, not even related to black pepper, botanically speaking, is a sweet dried berry used for seasoning in aboriginal cooking.

Mind you, these five were less than a whiff of the pepper world. My collection didn’t even include green peppercorns or black peppercorns from other continents or the unrelated pink and Sichuan peppercorns to boot. But truly, they were sufficient to shake me from my own misunderstandings.

I crushed each pepper in a mortar and pestle to get at their flavors, since it’s misleading to sense their aromas through smell. With my finger, I gingerly pressed the bits onto my tongue, anticipating mind blowing heat. Instead, I experienced the nuances of pepper, from spiced sweetness hinting of garam masala in the long pepper to the mild, citrusy burn of the white pepper. For the first time, I appreciated these spices for what they offered on their own terms.

In the following weeks, I crushed long pepper for a Middle Eastern vegetable stew with chickpeas and dropped it whole into my brewing chai. I ground white pepper into clam chowder and French onion soup with gladness. As I prepared dinner, I considered which pepper might enhance its flavors. My new favorite, the long pepper, the bona fide black pepper of the Greeks and Romans, now owns shelf space in my spice cabinet.

It was no leap to invoke the most pepper-forward preparation of all: steak au poivre, or pepper-crusted steak. I served it, by golly, with a creamy peppercorn dressing over salad mix. It seems I’ve learned that there are times, after all, when there is no such thing as too much black pepper.

Prepare the dressing for this meal first and let it sit at room temperature while you prepare the steak. This allows the dressing’s flavors to develop.

For the steak salad:

1.Whisk the sour cream, buttermilk, lemon juice, pepper and salt until smooth. Stir in the chives and taste for seasoning. If using right away, leave the dressing at room temperature to allow the flavors to develop.

If preparing in advance, store in a glass jar in the refrigerator for up to 5 days to use as a dressing and a dip.

For the steak salad:

1. Crush the peppercorns in a mortar and pestle until most are very coarsely crushed and some remain whole.

2. Dab the steak dry with a paper towel and season generously with the salt. Heat a cast-iron skillet over high heat with the oil. When the oil begins to smoke lay the steak in the center of the pan and cook without moving for 3 minutes. Turn the steak and cook for 3 minutes more.

3. Pile the salad greens in the center of 4 plates. Dollop on the dressing to taste. Layer on the steak and garnish with the shaved cheese. 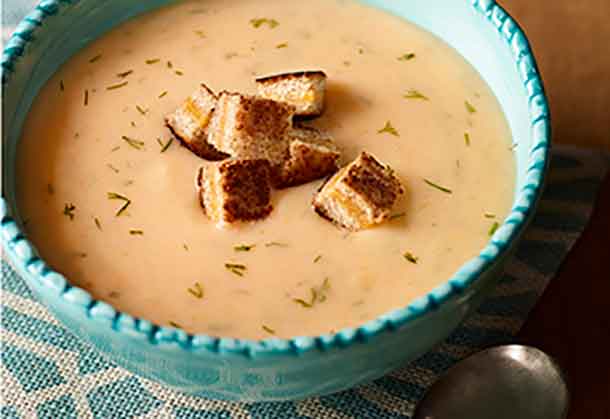 Soup up your Dining!