Home Politics Premier Wynne says Nursing a Priority for Liberals
TORONTO – POLITICS – “Ontario Liberals recognize the critical role that nurses play in delivering quality and timely health care. To ensure people get the right care, where and when they need it, we need to empower the dedicated professionals who care for us every day with appropriate roles and responsibilities. By expanding the roles of nurses, we can build on the quality and timely health care Ontarians already rely on,” stated Premier Kathleen Wynne.

A re-elected Liberal government will improve access to diagnosis and treatment for people by expanding the roles and responsibilities of nurses. Registered Nurses would be entrusted with the authority to prescribe medications while Nurse Practitioners would be able to order a full range of x-ray, CT scans, ultrasounds, MRIs, and other diagnostic procedures.

Ontario’s 60,000 nurses are the backbone of the strong public health care system the Liberal government has built in Ontario over the last decade. Nurses perform a wide range of front-line health services, taking care of people’s parents, grandparents and children every day.

In her first year as Premier, Kathleen Wynne has already expanded the role of nurses to give them the authority to dispense medication, and across the province has hired an additional 4,000 nurses.

In the 2014 Liberal Budget, Premier Wynne committed to do more to transform health care and keep people healthy by:

· Recognizing the valuable contributions of personal support workers in home care settings by increasing their pay by $4 an hour over the next two years.

· Increasing funding to Children’s Treatment Centres by $5 million to address waitlists for services.

· Implementing a ten-year plan to expand and improve the province’s hospitals.

The Hudak PC proposal to slash 100,000 jobs would put Ontario’s economy at risk and plunge the province back into a recession. Fewer people at work will result in less money invested back into the economy, leading to thousands of layoffs of highly-skilled workers and would undermine the progress made in health care.

Andrea Horwath’s NDP put Ontario’s economic recovery from the last recession at risk when they chose not to support the 2014 Liberal Budget, which would have made important investments in health care.

· Ontario is one of the few jurisdictions in the world to create a full-time job opportunity for new nursing graduates through our Nursing Graduate Guarantee.
· More than 16,000 new nursing graduates have benefited from a full-time job opportunity through the nursing graduate program.
· Last year, Premier Wynne invested more than $20-million to develop resources to educate and train nurses, improving patient care and making the work environment for nurses safer.
· Since 2003, Ontario Liberals have hired 20,500 more nurses to improve health care.
· Today’s announcement builds on recent changes that have allowed some nurses to dispense and prescribe medication as well as order laboratory tests, which is resulting in quicker treatment and better care. 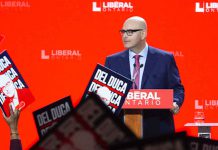 Ontario Liberal Leader on Long-Term Care: “Measures Announced with Do Nothing”