Cirque du Manger, when translated into English (for those of us who “didn’t do so hot” in our high school French classes) means “Eating Circus.”  Great name, because the place is indeed kind of a circus… sort of.  The circus theme is all through the place, sure, but it goes far beyond that.  It’s all about art, theatre, imagination, make-believe, steam punk and plenty of dancing and I’m talking about the “bump and grind” stuff.  There’s even a dance cage that’s been known to raise a few… um… well… eyebrows… ya, that’s it, eyebrows.

Along with edgy, sexy tunes and even better food, David Bowie would just love this place.

Dancing in the Streets

The food is best described as “comfort food with a carnival twist.”  Sure, they have some seriously sick menu items, like a killer rack of lamb, rib steaks and seasoned roasted chicken, but they also have something called a “Hot Diggidy Dog” that will blow your mind… and probably get you up dancing afterward, maybe even in the cage.  And, then there are the burgers… crazy burgers that you’ve simply never heard of before.  I hadn’t…

Even though the room has only been open since the late summer, the cocktail scene is already big at “Cirque.”  The venue is open late into the wee hours for those night owls that like to mingle.  And, with drinks like, the “Freak Show” and “Cirque’s Original Elektrik Popsicle,” I’m not surprised.

Cirque du Manager’s Grand Opening happens on Sunday, November 17 from 11 am until closing.  Anyone who walks through the door (and passed the bathtub filled with balloons… and maybe a human being) will be entered into a draw for tickets for four people to see “We Will Rock You,” a world-class theatrical event, at the Thunder Bay Community Auditorium, along with a killer “Cirque” dinner for four prior to the show, which takes place on November 27.

A long-standing “good cause” is the Community Clothing Assistance and on the grand opening, Cirque du Manger comes up to the plate… big.

Curtain Call for Ringling Bros. and Barnum and Bailey Circus 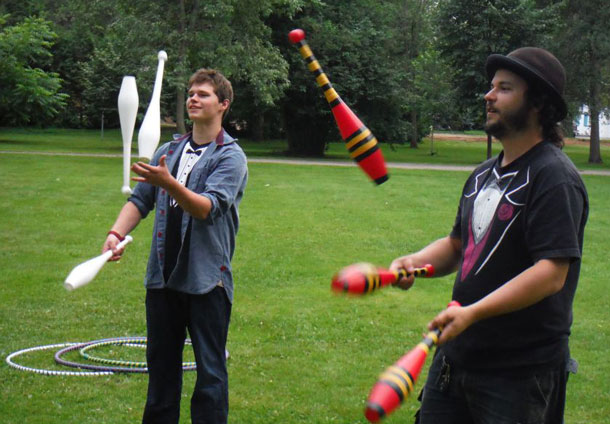 Juggle Your Daytimer for Cirque Works