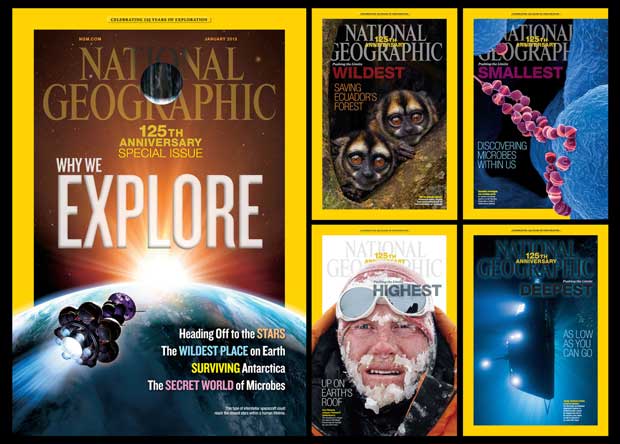 In a publishing first for National Geographic magazine, each copy of the January 2013 issue will feature five covers highlighting the Society’s 125thanniversary theme, “A New Age of Exploration.” The multiple covers will be included in the worldwide English-language edition and in 12 local-language editions and are exclusively supported by Rolex. These editions are read by more than 50 million people around the globe.

The January covers highlight the superlatives of exploration — farthest, wildest, smallest, highest and deepest. The top cover spotlights the farthest reaches of space travel as it looks at “Why We Explore.”The four additional covers profile other ways exploration is being pushed to the limits: The Wildestfocuses on saving Ecuador’s pristine rain forest; the Smallest looks at the invisible world of microbes; theHighest features mountaineer Cory Richards; and the Deepest highlights filmmaker James Cameron’s solo dive to the Mariana Trench.

The “New Age of Exploration” theme will be marked Society-wide throughout 2013, including the National Geographic Channels, website, books, magazines, video and live events. The yearlong initiative has been made possible through a 125th anniversary partnership with Rolex.

A dynamic online hub at www.nationalgeographic.com/125 will include special features such as an interactive exploration timeline, videos, interviews and photo galleries updated regularly during the Society’s 12-month focus on the future of exploration.

On June 13, 2013, the 125th anniversary will be celebrated at a “National Geographic Evening of Exploration” gala, where the Society’s top medals and honors will be awarded to explorers and other recipients. All proceeds from the gala will go to National Geographic’s Fund for Exploration.

“For 125 years, National Geographic has been at the forefront of discovery, driven by a passion and purpose to explore and illuminate the world. And there is so much more to know to help us reimagine not only our world but our place in it,” said Claudia Malley, executive vice president and worldwide publisher, National Geographic Global Media. “I can think of no better partner than Rolex, which is at the forefront of innovation and exploration, to join us in this quest.”

“With its shared passion for exploration, Rolex is delighted to partner with National Geographic on its 125th anniversary initiative. For decades, Rolex has supported pioneers of exploration, from the tallest mountain to the deepest ocean trench, and we look forward to being there, wherever man dares to venture next,” said Arnaud Boetsch, communications & image manager of Rolex SA.