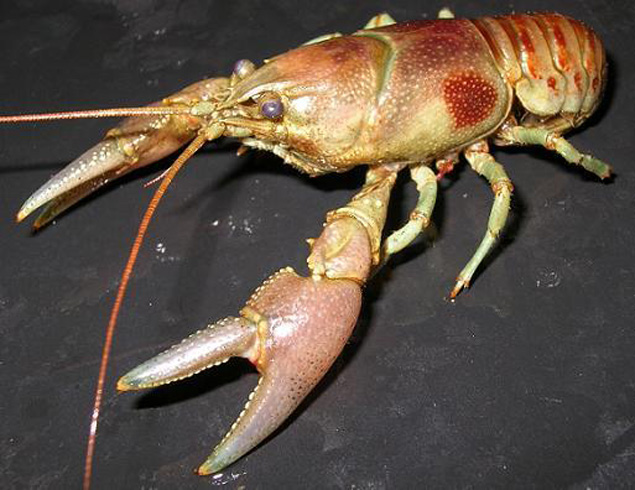 THUNDER BAY – The Ministry of Natural Resources and the Ontario Federation of Anglers and Hunters are asking the public to report any sightings of rusty crayfish, an invasive species recently found in a lake about 30 minutes southwest of Thunder Bay in Neebing Township.

The species, native to Ohio, Kentucky and Tennessee, has previously been found in the northwest region in Whitefish Lake, Lake Lenore, Poundsford Lake, Lake of the Woods, Quetico Provincial Park, and Lake Superior and its tributaries near Thunder Bay. The ministry recently confirmed that rusty crayfish have been found in Cloud Lake. It can be very costly and harmful to the environment to remove introduced species, like the rusty crayfish, once they are found in Ontario waters.

“Rusty crayfish are highly aggressive and can consume twice as much food as native crayfish,” says Davis Viehbeck, Ontario Stewardship Coordinator. “They drive native crayfish out of their choice hiding spaces, making them more vulnerable to preying birds and fish.”

Rusty crayfish were likely first introduced into Ontario as bait about 50 years ago. Anglers should ensure that they are not accidentally transporting rusty crayfish in their bait buckets and dump any unused, live rusty crayfish in the trash. Crayfish can only be used as bait in the same water body where they are caught. It is illegal to release live bait or dump the contents of a bait bucket, including the water, into or within 30 metres of any waters.

“Rusty crayfish are larger than native crayfish — about 10 cm or 4 inches long, not including the claws — with pronounced rust-coloured patches on their body. Their claws are green and rust-coloured with dark black bands near the tip,” says Viehbeck.  “Rusty crayfish eat the vegetation that fish and aquatic invertebrates use as habitat, which may diminish angling opportunities in lakes they have come to inhabit.”

The ministry is working with partners to prevent the introduction and spread of non-native species into Ontario waters. Information on these efforts can be found at ontario.ca/mnr.

For more information on aquatic invasive species or to report sightings of rusty crayfish or other invasive species, please call the Invading Species hotline at 1-800-563-7711 or visit www.invadingspecies.com.