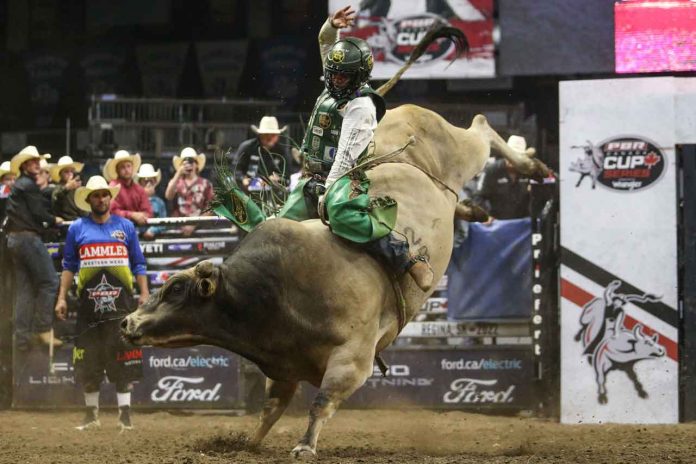 Australians Qynn Andersen and Jake Curr will travel to Canada, while Canadians Nick Tetz and Brock Radford will compete in Australia

PUEBLO, Colo. – SPORTS – PBR (Professional Bull Riders) Australia and Canada today announced the pair of athletes who will compete in the other nation’s year-end Finals event this November as part of a new transcontinental partnership to foster more competitive opportunities for the organization’s competitors.

Both young athletes Down Under are chasing their first PBR Australia Championship.  Andersen earned the berth as the No. 3-ranked rider in Australia, while Curr is presently No. 5. Each bull rider has delivered a torrid riding percentage thus far this season, covering more than 50% of their draws on home soil. Andersen has gone 25-for-49 (51.02%), and Curr has gone 12-for-23 (52.17%).

“It means a great deal to ride bulls and compete over in Canada as well as representing my home country,” said Andersen.

Additionally, both Andersen and Curr were members of Team Queensland, which was crowned the 2022 PBR Origin Champions.

Andersen’s season has included three event wins and seven round wins. In addition to winning the individual title at the PBR Origin events in Newcastle, New South Wales, and Brisbane, Queensland, Andersen won the most recent Monster Energy Tour event in Rockhampton, Queensland.

Curr earned his berth to the 2022 PBR Canada National Finals fresh off this third event win of the season earned at the mid-October Monster Energy Tour event in Mackay, Queensland. Thus far in 2022, Curr has also logged two round wins.

The 2022 PBR Canada National Finals, presented by Command Tubular Products, will be held in Edmonton, Alberta, at Rogers Place Nov. 11-12. The event will pay out more than $175,000 CAD.

At the 2022 PBR Canada National Finals, each rider will attempt one bull in Round 1 and Round 2 on Friday, November 11, followed by Round 3 on Saturday, November 12. Following Round 3, the Top 12 riders will advance to the championship round.

The rider with the highest aggregate score throughout four rounds will win the PBR Canada National Finals event title and a minimum $30,000 CAD.

Tetz and Radford are currently No. 2 and No. 4 in the feverish race to be crowned the 2022 PBR Canada Champion. They are the lone two riders to have won multiple Cup Series, presented by Wrangler, events thus far this season, and both briefly held the No. 1 position in the national standings.

In Touring Pro Division competition, Tetz earned an additional three wins, topping the field in Calgary, Kinsella and Czar Lake, Alberta, while Radford rode to victory at the developmental event in Winnipeg, Manitoba.

“Super excited to represent the red and white and to have a pile of fun and make some new buddies,” said Tetz.

“I’m super grateful for this opportunity,” said Radford. “For me, to be going, it’s more than just riding bulls. I have family in Australia and my grandfather ‘Pop’ will be at the Finals watching, so for him to see me ride is very special.”

During the 2022 PBR Australia Grand Finals, each rider will get on two bulls per night in Rounds 1-2 on Friday, November 25, and Rounds 3-4 on Saturday, November 26. Following Round 4 on Saturday evening, the Top 8 riders will then advance to the championship round.

The rider with the highest aggregate score throughout five rounds will win the PBR Australia Grand Finals event title.