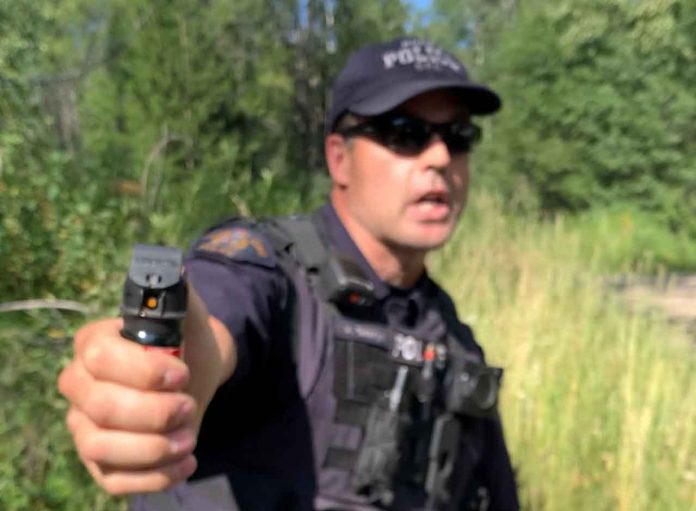 Unceded Wet’suwet’en Yintah (Smithers – BC) – On Friday August 12, 2022 at around 4:00 pm, land defenders were followed and harassed by police while enroute to their private residence on Gidimt’en yintah.

The police proceeded to use excessive force by arresting two land defenders and pepper spraying each arrestee and one other.

One of the victims of this violent assault had already been placed in handcuffs with their hands behind their back before being pepper sprayed.

This police escalation happened outside the residence of one of the victims who is a young Indigenous Land Defender, and far from any Coastal GasLink worksite. This is a blatant example of the targeted harassment that the RCMP and the CIRG has inflicted on the Wet’suwet’en and their supporters.

On July 13, 2022, the Gidimt’en Checkpoint launched a civil suit against the RCMP, CIRG, the Minister of Justice for BC, Coastal Gaslink Pipeline and private security contractor Forsythe for hundreds of instances of trespass, harassment, and intimidation tactics. The Department of Justice is asking for more time to respond, but while they stall, the RCMP are now escalating their violence against unarmed land defenders.

“Pepper spray has been misused by CIRG against crowds of land defenders at places like Fairy Creek; there is no reason why it is needed against three unarmed people driving to a private residence. This is a big escalation in police intimidation tactics against Wet’suwet’en land and water protectors,” says Sleydo’.

“This police attack targeting Indigenous people who live on the Wet’suwet’en yintah comes as people are preparing for a big cultural gathering with elders and children on the territory in August, and is clearly meant to intimidate and prevent Indigenous people from conducting our ceremonies on the land. We remain part of the Wedzin Kwa, the sacred river that we are protecting from colonial invaders. This won’t deter us from doing what is right, upholding our own laws that have been in place for thousands of years, protecting our land and standing up for future generations.”

The Coastal GasLink project violates Wet’suwet’en rights and title, and lacks consent of Wet’suwet’en Hereditary chiefs, who have been resisting the project for a decade.

Protests against RCMP in Wet’suwet’en Territory Ramping Up