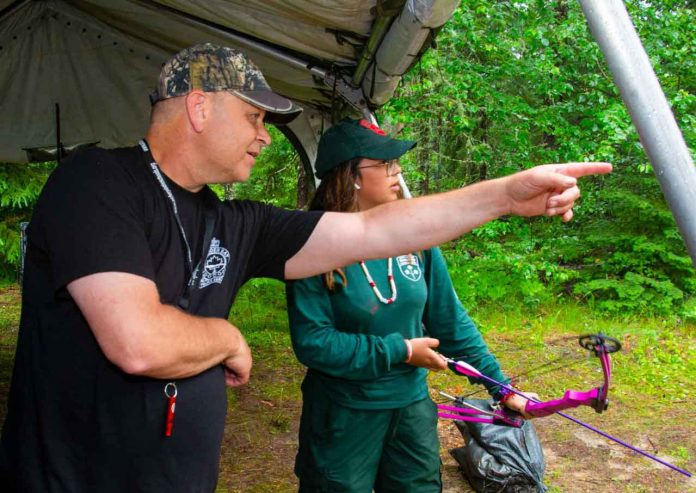 Camp Loon is located on Springwater Lake, 50 kilometers north of Geraldton, and is part of a Canadian Army program for youth aged 12 to 18 in remote and isolated communities across the Canadian North. In Ontario there are more than 700 Junior Rangers in 19 First Nations.

From July 18 to the 22, certified National Archery in Schools Program police officers taught basic archery principles to Junior Canadian Rangers during the week of training that also included first-aid, arts and crafts, and safe boating and ATV operation, and according to TBPS Community Outreach Staff-Sergeant Jason Anderson, the camp was a success for both officers and Junior Canadian Rangers (JCR).

“We hope we are invited back next year. It was a great experience. To see how the army puts this together was really special. The kids loved it too. They were shy at first but by the end of the week, they are all smiles,” said Anderson.

Known as On Target Archery, the program visits Boys and Girls Clubs and high schools in the Thunder Bay area in hopes of building a positive relationship between First Nations youth and police.

“We take the show on the road year-round. It’s about mentorship, for both the kids and officers. Often, they see us in uniform, this is about mentoring the kids for the future,” said Anderson.

“The kids really enjoyed it. The Junior Canadian Rangers train on The Three Circles, life skills, traditional skills and Ranger skills. These will be taught to them by the Canadian Rangers supporting the JCR patrols,” said Captain Courtney Giles.

Camp Loon was attended by 59 Junior Rangers from 17 First Nations, as well as 22 Canadian Rangers, who are part-time army reservists and acted as instructors, and 45 other military personnel to run it.