THUNDER BAY – The Viking Octantis has departed Thunder Bay leaving at 05:00 am on Sunday, to spend much of the day at Silver Islet. On Monday the massive cruise ship is headed to Duluth, Minnesota.

On Saturday in Thunder Bay, there were a steady stream of people at Marina Park to see the ship.

It was also a day of re-stocking the ship. Trucks with food supplies from Sysco Foods unloaded at Pier Six. Waste was trucked out by GFL in tanker trucks.

Sean Davis of Maintair Aviation Services Ltd says, “We are the landside agent for Viking looking after all operations related to guest services, luggage, shore excursions, transportation, and support while in Port.”

“It’s a very large operation and we have approximately fifty people engaged when the ship is in port looking after all of their needs,” added Davies.

This can present some challenges. The fog on Saturday impacted some passengers getting into Thunder Bay by air.

Davies says, “Today, we reunite the guests that were delayed by the fog yesterday with the ship today at Silver Islet!”

“It’s an amazing amount of work. The fifty people is just my crew, there’s fifty plus more people on contract with the transportation drivers, environmental, waste-removal and so on. It’s a huge boost to local companies,” states Davies.

Crew members from the ship got to visit the city Saturday night, Silver City was a popular destination with a lot of the crew. After their first week at sea, many choose TopGun Maverick to get airborne excitement.

Some of the crew, using bikes from the Octantis were touring the city as well on Saturday.

The eight-day cruise, from Milwaukee Wisconsin to Thunder Bay and then back again, arrived in Thunder Bay on Friday. Guests were at the Delta Waterfront Hotel on Saturday.

There were charter Air Canada flights that arrived at the Thunder Bay Airport where they were greeted to the welcome of water cannons from the airport fire crews. 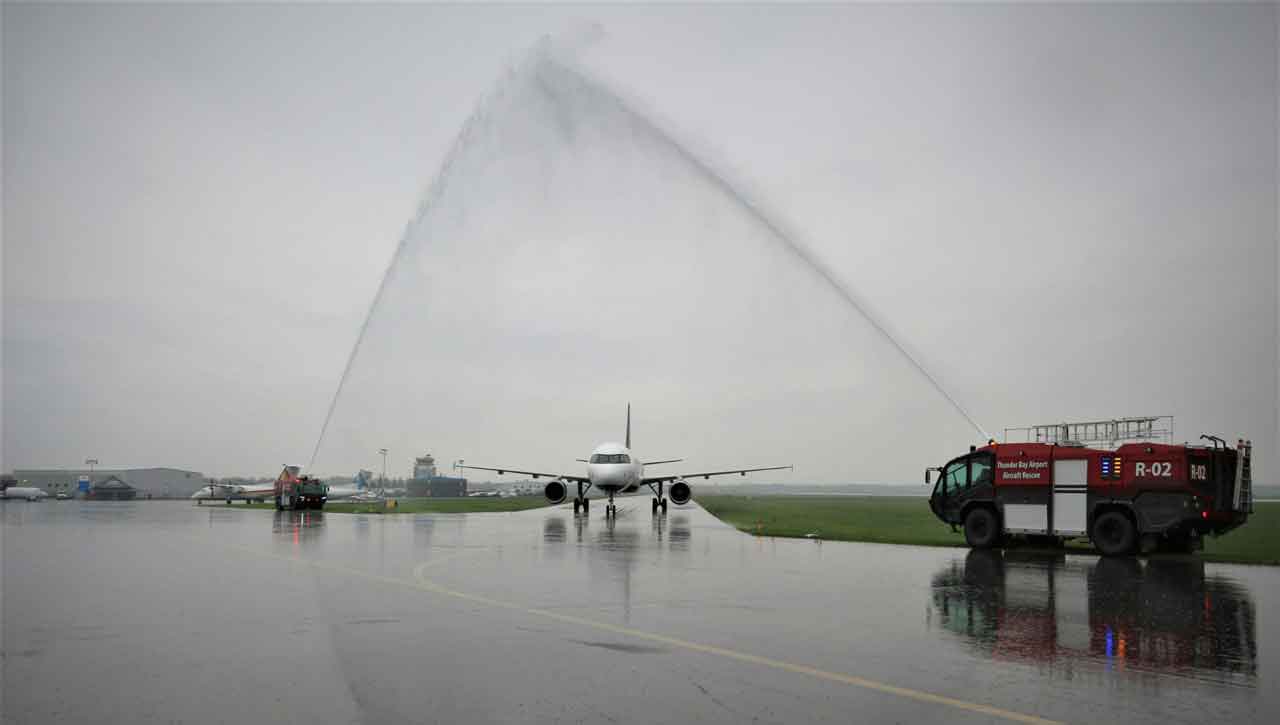 There were a lot of people who headed down to see the Viking Octantis at Marina Park on Saturday. The rain didn’t hamper the enthusiasm of many.

That is not to say as many people told NetNewsLedger that there isn’t room for improvement.

There isn’t a fully paved walking path right to Pier Six where the Alexander Henry and the cruise ship docks. That was an issue to parents with children on Saturday. A person with a mobility issue in a wheelchair would have a very hard time getting to the viewing area easily.

That reportedly is coming later this year. It is needed.

NetNewsLedger has raised these concerns with city officials and will post their answers once we have them.

There was traffic on that roadway on Saturday with a fairly frequent number of shuttle vehicles, Ford Transit buses for passengers, as well as large trucks for offloading waste water sewage from the cruise ship.

The larger vehicles do take a toll on the road into Pier Six which on the curves are basically pothole littered.

Some work needs to be done to make this road a far better welcoming path into the city for visitors on the cruise ships, but also for locals and tourists visiting and wanting to tour the Alexander Henry.

There are some concerns being raised by residents in the condos down at the waterfront as well over the number of large trucks and buses – some reportedly using the private roadway to the back of the condos to leave the hotel area. This raised concerns of some of the residents who found it less safe leaving the parking garage.

An email supplied to NetNewsLedger stated, “I really feel we should concentrate on better signage concerning our parking lot. There are far too many people in the city who consider this a shortcut street and cruise through here at unfathomable speeds. Coming out of the garage can be a death trap despite how careful one looks both ways and then again. I have almost been wiped out several times due to speedy drivers who should not be accessing this as a street.”

It is really easy to get excited with the arrival of the Viking Cruise ships to Thunder Bay, these are brand new state of the art vessels and from some of the International media reports already our region is getting some very much needed coverage.

A goal should be constant efforts to improve the opportunities and expand the potential.

“The rain and cold Saturday kept guests aboard but we anticipate more will explore the area on the warmer days.  Viking, shore excursion contractor and us all communicate daily to evolve programming,” adds Pepe.

This first arrival of the Viking Cruise ship Octantis is the first of the season. It can be hoped that the season will be a success, and that the full economic benefits for City of Thunder Bay businesses are realized.