OTTAWA – NEWS – Ottawa Police along with reinforcements are enforcing the exclusion zone around the Parliament Buildings. On Friday there were seven people arrested.

500 participants are expected to travel to Ottawa this weekend, in what is called Rolling Thunder, according to event organizers. 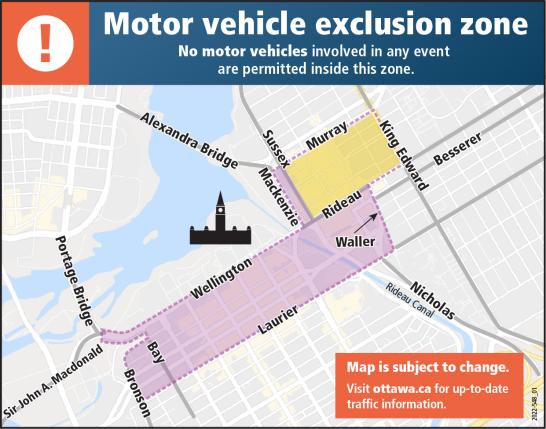 Ottawa Police Service and its policing partners continue to manage demonstrations in the downtown core of Ottawa, and we are continuously assessing public safety surrounding this weekend’s events.

There have been no reported injuries, and police remain in full control of city streets, according to a statement issued Friday night by Ottawa Police.

On Friday, partner police agencies assisted OPS with tracking several convoys of vehicles. Officers responded and adapted to a concerted and coordinated effort to distract police resources in order to gain access to the downtown core. Several attempts were made to occupy areas of the city but were thwarted with the assistance of officers, Bylaw and tow trucks.

The first convoy stopped at Lees Avenue and initially refused to leave. One person was arrested at that location, and the remainder of the vehicles departed after tow trucks arrived on scene.

The congestion of several convoys and protesters on foot prompted the full closure of the motor vehicle exclusion zone. Streets were later reopened when it was deemed safe to do so.

Public Order Units were deployed to the Rideau/Sussex area Friday evening to disperse an aggressive and combative crowd. For their own protection, officers were deployed with hard tactical gear, including helmets and batons. Multiple people were arrested at this location, and three vehicles were towed.